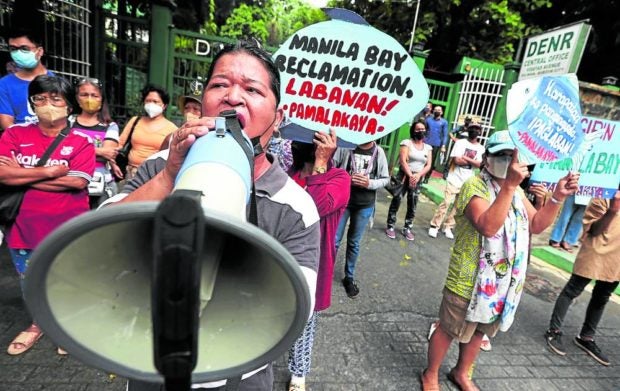 FILE PHOTO: Members of the fisherfolk group Pamalakaya stage a protest at the main office of the Department of Environment and Natural Resources in August 2022. The group is part of a coalition that has written Environment Secretary Toni Yulo Loyzaga urging her to reject all reclamation projects at Manila Bay. Philippine Daily Inquirer/Niño Jesus Orbeta

MANILA, Philippines — A fisherfolk organization on Tuesday branded the government’s Fish Conservation Week as “pure hypocrisy,” asserting that agencies have remained passive about the problems of fishers and the environment.

The Pambansang Lakas ng Kilusang Mamamalakaya ng Pilipinas (Pamalakaya) criticized the government specifically for its inaction on issues hounding reclamation projects which, according to the group, have brought systematic destruction of marine and aquatic resources in the country.

The Department of Agriculture (DA) and BFAR is hosting the 59th Fish Conservation Week from September 12-16.

“How ironic that Fish Conservation Week is being observed in the midst of massive destruction of coral reefs, mangrove forests, and seagrasses to pave (the) way for profit-driven reclamation projects,” Pamalakaya spokesperson Ronnel Arambulo said.

Arambulo added that reclamation projects, which continue to pose severe dangers to the nation’s marine ecology and fisheries resources, are not yet explicitly opposed by the DA-BFAR.

“DA-BFAR had the audacity to celebrate this event while neglecting our fishers’ clamor for protecting their fishing waters and coastal communities,” he stressed.

Reclamation plans, including the 650-hectare project in Navotas City that is being proposed by food and beverage giant San Miguel Corp. in collaboration with the city’s local government, threaten the livelihoods of more than a thousand fishermen, fish workers, and operators of fishing structures, according to the Pamalakaya).

“In the country’s fishing capital, thousands of small fisherfolk and fish workers are at the risk of losing their livelihood courtesy of the ongoing dismantling of fishing structures and mussel farms (tahungan) for reclamation. One can only imagine the extent of the damage to local fisheries production if these productive fishing structures would entirely vanish,” Arambulo said.

Along with other peasant organizations, Pamalakaya on Tuesday conducted a protest-march in Quezon City to the DA central office, coinciding with President Ferdinand Marcos Jr.’s 65th birthday. Marcos is also the DA Secretary, serving in a concurrent capacity.