Chinese study looks at how water got on the moon 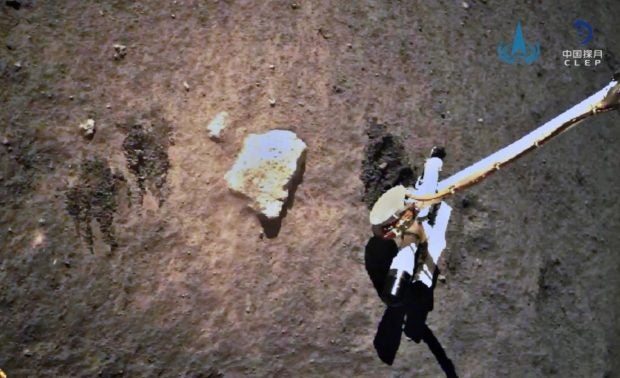 BEIJING — At least since the first manned missions to the moon in the 1960s and early ’70s, the general belief was that Earth’s orbiting partner was bone dry. Then, about two years ago, several lunar missions showed that’s not absolutely true. Some lunar soil contains minute amounts of water molecules.

But where did water on the moon come from? Answering that question can help us understand the moon’s history and evolution, but also allow future engineers to potentially tap into this resource when building a sustainable moon base.

Chinese scientists have discovered that minerals in lunar soil might have got that substance critical for life from solar wind bombarding the moon’s surface with hydrogen ions, according to a study published in the journal Nature Communication on Saturday.

In a previous study, published in June, Chinese scientists concluded that most water found on the moon may have originated in its interior. That study, like the new one, was conducted on lunar samples from China’s Chang’e-5 mission in 2020 from the moon’s Oceanus Procellarum basin.

The study in June found that lunar soil had around 30 parts per million of water content in the form of hydroxyl, a close chemical relative of water made of one oxygen and one hydrogen atom. However, lunar minerals may contain water content of up to 179 ppm. One ppm of water would yield around 1 gram of water per metric ton of soil.

The latest study essentially confirms the estimates from the previous research, and those lunar minerals could contain even more water. Moreover, the new study identified solar wind as a key mechanism for the existence of water on the moon’s surface.

The study found that the solar wind resulted at least 170 ppm of water content in lunar samples gathered by the Chang’e-5 mission. Minerals such as pyroxene, plagioclase, and olivine are likely the main reservoirs of solar wind-derived water.

“This study has important implications for understanding the evolution of water on the lunar surface and evaluating the contribution of solar wind protons to the water reservoirs of the lunar surface,” the researchers said.

Scientists are still debating exactly how much water there is on the moon. They propose three sources for it: that it was created in the moon’s interior when it was full of volcanic activity; that it comes from solar wind, and that it was brought by comets and meteoroids crashing into the lunar surface.

Lunar samples collected during the Chang’e-5 mission may hold the keys to answering these questions, since they are much younger than the ones collected by US and Soviet moon missions, according to the Institute of Geology and Geophysics of the Chinese Academy of Sciences.

Because of this, the water content in the Chinese samples has had less time to be influenced by other factors, making these samples ideal for studying the moon’s water.

Scientists successfully grow plants in soil from the Moon