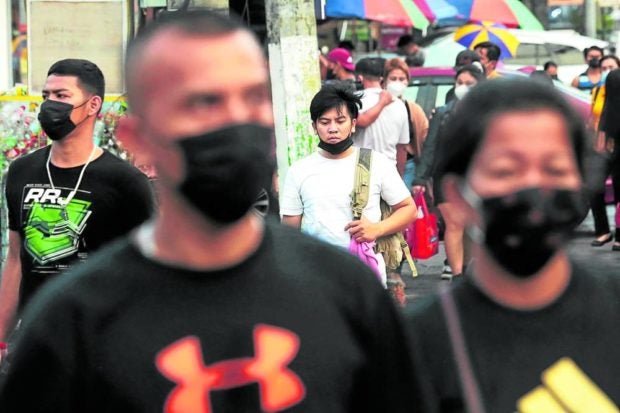 STILL COVERED | The government on Monday announces the easing of face mask use in outdoor and well-ventilated spaces in the country. On Kamuning Road, Quezon City, most people seen crossing the street keep their masks on as Filipinos start to learn to live with COVID-19. (Photo by GRIG C. MONTEGRANDE / Philippine Daily Inquirer)

MANILA, Philippines — Wearing a face mask is now optional outdoors and in areas that are well-ventilated and not crowded.

President Ferdinand Marcos Jr. on Monday issued Executive Order No. 3 relaxing the mask mandate as recommended last week by the Inter-Agency Task Force for the Management of Emerging Infectious Diseases (IATF), despite opposition from several medical groups and health experts due to the poor booster vaccination coverage in the country and the continuing community transmission of COVID-19.

The presidential directive, however, requires masking in indoor private or public establishments, crowded and poorly ventilated settings, and in all public transportation, adding that “not fully vaccinated individuals, senior citizens and immunocompromised are highly encouraged to wear their masks and physical distancing will be observed at all times.”

The order took effect immediately upon its publication in the Official Gazette also on Monday.

In the EO, the president noted that neighboring countries in Southeast Asia and various governments across the world have liberalized their mask mandates “without significant increase in the number of COVID-19 cases.”

“We are happy to announce that we are 6 percent away from the wall of immunity, that is why we are emboldened [in relaxing the rule] on face masks,” Press Secretary Trixie Cruz Angeles said in a press briefing.

She said the achievement of a wall of immunity, or 100 percent of the target population, was one of the conditions imposed by the president, but “since we’re 6 percent away from that, then it’s time.”

“We’re doing this in stages, in phases, so that we can have feedback on whether or not these new policies are working, and how to make them more efficient so that hopefully by the end of the year we might be able to be voluntarily masked indoors as well,” she added.

All departments, agencies, and instrumentalities of the government, including state universities and colleges, government-owned and -controlled corporations and financial institutions, and local governments were directed “to render full assistance to and cooperation with the IATF for the effective and orderly implementation” of the EO.

Angeles said local governments would play a role in implementing the EO as they would determine, “with some discretion,” which outdoor setting would require the wearing of face masks.

Marcos has also extended the state of calamity due to the pandemic for three more months, “but only for the purpose of preserving the benefits under it,” according to Angeles.

These include emergency procurements, indemnification for vaccine side effects, and special risk allowances for healthcare workers.

Some lawmakers have joined health professionals in opposing the easing of the mask policy. Iloilo Rep. Janette Garin on Monday described as “premature” the IATF’s recommendation to make the wearing of a face mask optional as it would send a “mixed signal” wherein the public might get the impression that COVID-19 booster shots were unnecessary.

“What are the added benefits of taking off the masks? I still don’t understand, but we are taking a huge risk in relaxing the protocol. The question is, have we prepositioned medicine for COVID? If you get sick, will this medicine be given for free? These are questions that should be answered before we have a final decision on the mask policy,” Garin, a former health secretary, pointed out.

“The virus is not any less serious or dangerous just because we’ve decided that masks are optional. We should not be lulled into a false sense of safety,” Hontiveros said.

“Let’s not forget that we have reopened most of the economy and can live our daily lives now partially thanks to the protection of masks,” she added.

For Kabataan Rep. Raoul Danniel Manuel, the Marcos administration seemed “overly confident” in making the use of a face mask optional in outdoor areas.

“Policies like making masks optional in outdoor spaces arise when health experts and professionals take the back seat in national decision-making. Public officials should be the first to educate their constituents about COVID-19, rather than let the people be harmed by dangerously misguided policies,” he said.

Sen. Christopher “Bong” Go, chair of the Senate health and demography committee, said that while he believed that the government’s decision was based on “good science,” he advised the public not to be complacent.

“We have been at the forefront of advocating the relaxation of the mask mandate for the outdoors as long as these spaces are not crowded and there is good ventilation,” the group said in a statement.

OCTA, however, urged the government to determine the conditions that will “trigger” reimposing the use of masks outdoors.

It also encouraged the public to participate in vaccination and booster programs.

“Mask or no mask, the vaccination programs need to be intensified as these are the most viable ways to protect our citizens from COVID-19,” said OCTA.

On Monday, the Department of Health said that daily reported COVID-19 cases continued to decline for the fourth straight week.

The seven-day average detected cases fell to 2,197, which was 10 percent lower than the previous week’s 2,449 average daily cases.

Of the 15,379 new cases confirmed by laboratory tests, 12 were in severe or critical condition which brought the current total severe and critical cases to 727 from 768 last week.

The relaxed mask mandate was initiated by Cebu despite initial concerns from the national government.

On Sunday, Negros Occidental adopted the optional use of face masks in outdoor settings.

Gov. Eugenio Jose Lacson released Executive Order No. 22-45 making the use of masks in outdoor and open spaces in the province voluntary.

Lacson was the fourth local chief executive who issued the order following the province and city of Cebu as well as Iloilo province.

The governor, however, stressed that the wearing of masks in indoor spaces, including hospitals and other medical facilities, would remain mandatory.

To wear, or not wear, face masks vs COVID: The zigzag road PH is taking