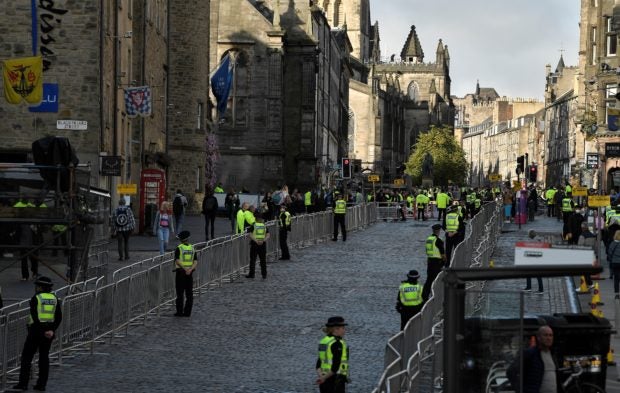 Police officers stand on duty on the Royal Mile in Edinburgh on September 12, 2022. AFP

EDINBURGH — Mourners will on Monday get the first opportunity to pay respects before the coffin of Queen Elizabeth II, as it lies in an Edinburgh cathedral where King Charles III will preside over a vigil.

Thousands of people are expected to line up for the chance to see the flag-draped casket at St Giles’ Cathedral in the Scottish capital, a week before her funeral in London.

The new monarch will walk behind his mother’s coffin in a sombre afternoon procession leading from Holyroodhouse palace — where it arrived on Sunday after making a six-hour road journey from Balmoral Castle — to the cathedral.

In the morning, the new king is due to address British lawmakers in London for the first time since ascending the throne, as the pageantry continues ahead of the queen’s September 19 state funeral.

The lengthy mourning period comes with Britain trying to reconcile itself to the death of its longest-serving monarch, who has been part of the backdrop of national life almost since World War II.

“To see her pass, in front of us, I think actually gave a bit of closure,” said Lucy Hampshire, who came to Edinburgh with her boyfriend from the northern English city of York.

Crowds turned out in the Scottish capital Sunday as the hearse carrying the queen drove through the city, with some cheering, some throwing flowers and a few shedding tears in an outpouring of respect.

People also lined the streets of towns and villages along the 180-mile (290-kilometer) route from her beloved Balmoral estate, where she died on Thursday aged 96 after seven decades on the throne.

Images of the coffin draped in the Royal Standard of Scotland dominated the front pages of British newspapers Monday.

“The saddest journey… now the long goodbye,” headlined the Daily Mail on its cover.

Elizabeth II’s oak casket rested overnight in the throne room of Holyroodhouse palace. Charles and his queen consort Camilla are due to fly to Edinburgh on Monday after his speech in parliament.

The king and senior royals will then follow on foot behind her hearse, flanked by soldiers, in a procession to take her along Edinburgh’s historic Royal Mile to the 12th century St Giles’ Cathedral.

The coffin will be carried into the imposing grey stone cathedral, where it will be topped with the Crown of Scotland, before a minister leads a service of “prayer and reflection” for the queen.

Her coffin will remain there for 24 hours “to enable people of Scotland to pay their last respects”, a palace official said. Reports said there would be tight security and long queues were expected.

King Charles III and senior royals will mount a vigil beside the late queen at 7:20 pm (1820 GMT), while soldiers from the Royal Company of Archers will stay on guard throughout.

The queen’s body will be flown to London on Tuesday by Royal Air Force jet to an airfield near London, accompanied by the queen’s daughter Princess Anne, and driven to Buckingham Palace.

The following day royals will follow the coffin, carried atop a gun carriage, to Westminster Hall — the oldest part of the UK parliament — where it will lie in state from 5:00 pm (1600 GMT) until the day of the funeral.

At least a million people are expected to visit the coffin, resting on a catafalque in the cavernous hall. Officials have warned that people should expect to wait “many hours” and possibly even to queue overnight, and must go through “airport-style security”.

The funeral itself is set to be watched worldwide and attended by numerous heads of state, including US President Joe Biden, as well as global royalty.

As Charles III takes on what he has called the “heavy responsibilities” of kingship, the new monarch’s traditional visit to parliament will enshrine his role as constitutional head of state.

In Monday’s ceremony at Westminster Hall, where the queen will eventually lie in state, both chambers of the British parliament will express their condolences at her “demise”.

Charles will then give a formal reply.

The new king will also make his first visits as monarch to Northern Ireland and Wales this week in a show of national unity.

While the emotional scenes in Scotland showed the deep affection for the queen there, her passing has also reignited a debate over Scottish independence from the United Kingdom.

Scotland’s First Minister Nicola Sturgeon said it was a “sad and poignant moment” to see the coffin leaving Balmoral. But the pro-independence leader has been pushing for a new referendum on the divisive issue.

“I’m not for independence — we’ve been together for hundreds of years. Why stop now?” said mourner Anne Johnston, 68, from Edinburgh.

She added, however, that “no offense to Charles, but I don’t think he’ll ever live up to the queen.”

Britons have lost the only monarch that most of them have ever known, a figure familiar to them and millions around the world from banknotes, stamps and annual Christmas televised messages.

Charles has seen his popularity recover since the death of his former wife Diana in a 1997 car crash, but has been embroiled in several scandals in recent years.

He takes the throne at a moment of deep anxiety in Britain over the spiraling cost of living and international instability caused by the war in Ukraine.

With republican movements gaining ground from Australia to the Bahamas, the new king also faces a challenge keeping the Commonwealth realms in the royal fold.

Charles hosted his first reception Sunday for representatives of the 14 former colonies over which he reigns in addition to Britain — at least for now.

Meanwhile, one previously unanswered question was resolved Sunday, when it emerged that scandal-hit Prince Andrew and his ex-wife Sarah Ferguson will look after the queen’s two beloved remaining corgis.

The prince — who stepped back from royal duties in 2021 over his association with convicted US pedophile Jeffrey Epstein — will take on Muick and Sandy, dogs that he had gifted to the queen that same year.

Prince William honored to be made Prince of Wales–statement