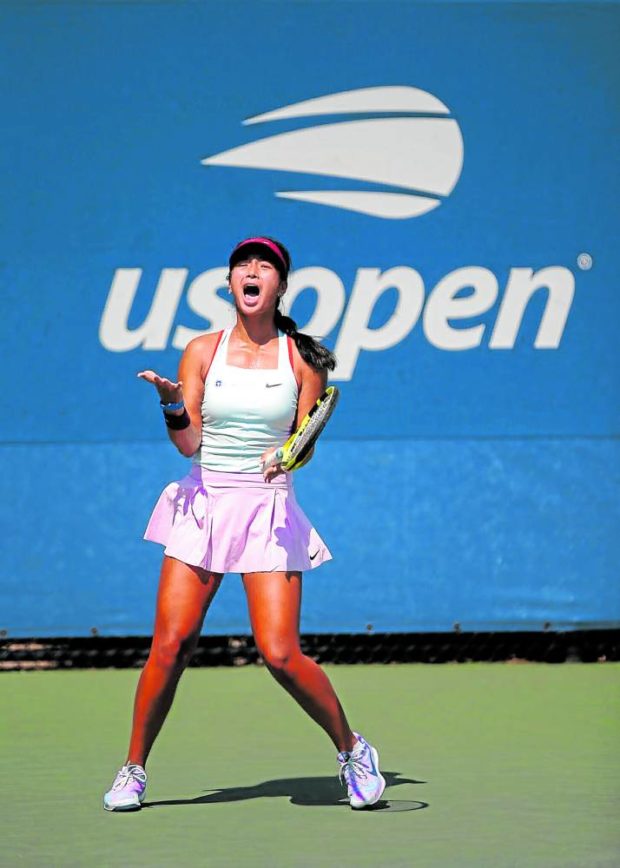 ‘I FOUGHT WITH MY HEART’ Alex Eala showed remarkable fitness as she conquered the US Open Girls Singles field. “This victory is not only mine but ours,” she said afterward, addressing the crowd which included her compatriots in Filipino. —KEATS LONDON

MANILA, Philippines — Lawmakers at the House of Representatives led by Speaker Ferdinand Martin Romualdez have congratulated Alex Eala for being the first Filipina to win a grand slam singles title at the 2022 US Open.

Romualdez said in a statement that Eala showed what Filipinas could achieve with “grit, determination, and perseverance.”

“Once more, a young Filipina athlete showed the world what mankind could achieve with grit, determination, and perseverance. Congratulations, Alex Eala, for showing us the way to greatness,” Romualdez said Sunday.

“The Filipino nation is truly proud of you, and we are forever grateful for your success on the global stage.  Mabuhay ang Pilipinas!” he added.

“This is yet another proof that Filipino women are capable of blazing (a) trail for the country in global sports events, and further testament of our strength despite prevailing macho-feudal notions,” the group said.

“We will continue to push for greater state funding for the development of Philippine sports and the support for Filipino athletes, especially Filipino women athletes,” it added.

“We salute Alex for bringing great pride to our nation and proving the world-class talents of the Filipino in sports and other fields of endeavor anew, after winning her first singles Grand Slam title in the US Open Juniors tournament at the Billie Jean King Center in New York,” said Camarines Sur 2nd District Rep. LRay Villafuerte.

“We commend and congratulate Eala for winning the 2022 US Open Girls’ Singles title at the USTA  Billie Jean King National Tennis Center, New York, bringing another prestige to the Philippines and exhibiting how Filipinos can compete even at the international level through their world-class talent,” reads the resolution authored by the legislators from Bicol.

“My heartfelt congratulations to Ms. Alex Eala; you make our country and fellow Filipinos as well very much proud of what you have achieved,” Martinez said in a separate statement on Monday.

“Indeed, you give great joy and honor to all of us and will forever be the source of inspiration (sic). That would remind us, (especially) the future generations, that passion, hard work, and dedication (are) the key to realizing our goals,” he added.

Martinez said Eala’s victory should serve as a cue for the government to invest in young Filipino athletes.

“I strongly believe that Alex Eala (has) a long career ahead of her that could probably equal the achievements that of the Mighty Mite, Felicisimo Ampon,” the lawmaker said, referring to the late athlete considered to be the best Filipino tennis player.

“The message is clear. We should invest early (in) our young generation of athletes,” he added.

Senior Citizens party-list Rep. Rodolfo Ordanes also commended Eala, noting that many Filipinos and foreigners of Filipino heritage will gain inspiration from her historic triumph at the US Open.

“Tennis courts all over the Philippines and around the world will see Alex Eala as their role model as they pursue their tennis dreams,” Ordanes said in a separate statement.

“I (hope) that our sports officials will realize the immense value of interdisciplinary collaboration and the provision of adequate team support for the many upcoming athletes in tennis and other sports,” he added.

Eala became the first Filipino to win a tennis Grand Slam singles title after beating World No.3 Lucie Havlickova of Czech Republic, 6-2, 6-4, in the final of the 2022 US Open girls singles competition in Flushing Meadows, New York on Sunday, September 11 (Manila time).