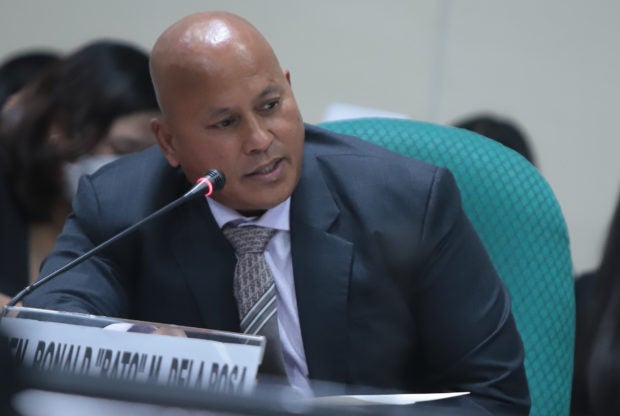 MANILA, Philippines — The increase in kidnappings and other crimes indicates that the illegal drug problem is coming back, Sen. Ronald “Bato” dela Rosa said in an interview with AM radio station DWIZ.

Dela Rosa, who chairs the Senate Committee on Public Order and Dangerous Drugs, made the remark when asked for his reaction to recent reports of abduction.

“You know, no one in their right mind would do such a thing. If they’re not addicted to drugs, these idiots would not do that,” Dela Rosa said in Filipino. “So this is one of the indicators that drugs are returning here because the crimes are being committed in the open. Most of them are done under the influence of drugs.”

The senator sounded the alarm on the recent reports of kidnappings, particularly of women and Filipino-Chinese, in different parts of the country.

He said his committee might conduct a public hearing about the incidents.

Sen. Grace Poe had earlier filed a resolution requesting Dela Rosa’s committee — along with others dealing with crime issues — to conduct an inquiry into the kidnappings.

Poe’s resolution cited the revelation of Lugene Ang, the president of the Philippine Chinese Chamber of Commerce and Industry Inc. that there have been 56 kidnappings “for the last 10 days” since Sept. 6.

However, the Philippine National Police countered Ang’s claim, saying there were only 27 kidnapping cases reported to them so far this year.