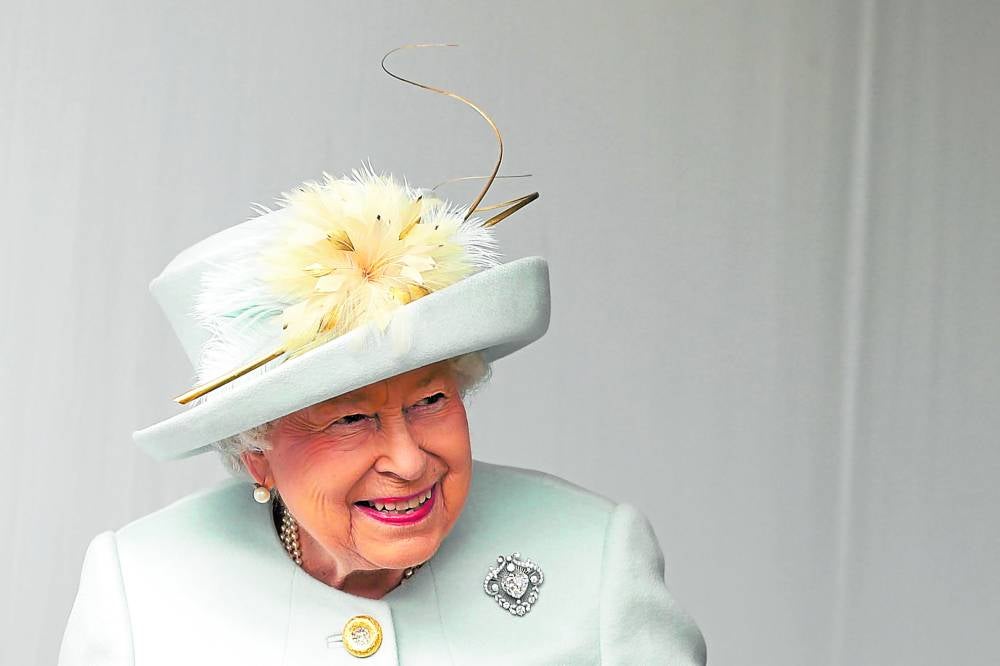 ‘CONSTANT PRESENCE’ The British government has declared a period of national mourning for Queen Elizabeth II, who died on Sept. 8 at age 96 at Balmoral, her Scottish estate. The nation’s longest-serving monarch has been dogged by health problems since October. During the period of mourning, there is no obligation to cancel events or close entertainment venues, a matter that is up to the organizers. —AFP

Hundreds braved torrential rain to stand at the palace gates after it was announced that doctors had placed the monarch under medical supervision at Balmoral, her Scottish estate. No details were disclosed about her illness.

A vivid rainbow temporarily lifted spirits, but the mood turned mournful at 6:30 p.m. as the seismic news was announced, triggering widespread cries of “oh no,” according to an Agence France-Presse (AFP) journalist.

Some wept as the Union Jack flag on the queen’s London residence was lowered, before a numbed silence fell over the crowd.

Another rainbow appeared as the flag was lowered at her Windsor Castle residence outside London.

Another mourner, Suzan Antonowicz, compared the death of Elizabeth to losing a family member.

“She is the mother of our nation. She was heroic in so many situations. My respect for her is incredible, but my love is even bigger. We will grieve our loss for years,” she said.

Choking back tears, Joshua Ellis, 24, said he was in “shock.”

“Every time people needed support she was there. She was also a link to my grandmother, who was a huge fan of her and passed away last year,” he said.

Britain’s longest-serving monarch had been dogged by health problems since October last year which left her struggling to walk and stand.

News of her death spread across a shell-shocked country, with announcements in public spaces, including a train from London to Edinburgh.

“I’m speechless, it’s very sad,” said lawyer Rory Turbet, 38, who was traveling on the train for a wedding.

“A lot of British people will feel that way; she’s been a constant presence in people’s lives,” he added.

Drivers of London’s famous black taxis lined the Mall, the road leading to Buckingham Palace, in tribute, while the neon lights of Piccadilly Circus glowed with a picture of the late monarch.

Supporters of Premier League football club West Ham spontaneously broke out into a rendition of “God Save the Queen” before their Europa Conference League fixture, while Manchester United fans observed a minute’s silence ahead of their match.

“She was our conscience. She was like the nation’s grandma,” said Sophie, 27.

Many of the well-wishers at Buckingham Palace, some carrying flowers, came from outside the United Kingdom.

“As a French person, even I am touched by this,” said student Chloe Papeil. “She is a part of English culture, but also global culture.”

The queen was in her Platinum Jubilee this year, marking 70 years since she succeeded her father King George VI in 1952.

Family life provided the biggest shocks during her reign, as she was often away for long stretches, at times joining her husband Prince Philip abroad.

Elizabeth was 22 and still a princess when Charles, the eldest of her four children, was born, and 24 when Princess Anne came along.

The young children stayed at home with their nannies and governesses, just as she had done as a child in the late 1920s and 1930s.

The queen was also frequently occupied by work.

“I’m sure she loved her family. But I don’t think she was demonstrative in her affection,” Junor said.

In a later authorized biography, Charles would say his mother was “not indifferent so much as detached.”

“If he’d been a horse or a dog they would have been a lot closer,” Junor said about Charles, who was described as a sensitive and awkward child.

In contrast, the queen, who was known for her love of horses and corgis, was closer to her daughter, Anne, who developed into a skilled horsewoman, allowing the pair to share a mutual passion.

Strict royal protocol did not help foster closer bonds either: the queen’s children and grandchildren had to bow or curtsy before her even behind closed doors.

Complicating matters was Charles’ lifelong role as heir which made his future entirely dependent on the death of his mother.

“Charles has always adored his mother and put her on a bit of a pedestal. It’s not a mother-son relationship. It’s more monarch-subject,” Junor said.

With Andrew and Edward, who were born when she was 33 and 37, the queen had a more relaxed relationship with her family.

But in 1992, Anne divorced her husband Mark Phillips, Charles split from Diana and Andrew separated from Sarah Ferguson.

Compounded by a major fire at her favored Windsor Castle home west of London, those 12 months became her “annus horribilis,” in the queen’s words.

After Diana’s death in 1997, Elizabeth initially rejected the idea that Charles would marry his long-term mistress Camilla Parker Bowles.

She did not attend their civil wedding in Windsor in 2005 but did organize a reception at the castle.

Asked about Charles’ criticism of their mother, Anne told BBC: “I don’t believe any of us for a second thought that she didn’t care for us in exactly the same way as any other mother did.”

Separations were not the end of family strife.

In 2019, Andrew—reportedly her favorite—was forced to step back from front-line royal duties because of his friendship with convicted sex offender Jeffrey Epstein.

The following year, grandson Harry and his wife, Meghan, quit royal life and moved to the United States, from where they criticized the family, even accusing some members of racism.

Elizabeth met the couple’s daughter, Lilibet, only once.

Yet the queen—who was eight times a grandmother and had 12 great-grandchildren—loved family dinners and held annual Christmas get-togethers at her Sandringham estate.

Grandson William, whom she had grown close to after Diana’s death, paid a glowing tribute to her in a recent biography.

“The queen’s kindness and sense of humor, her innate sense of calm and perspective, and her love of family and home are all attributes I experience first-hand,” he wrote.

“I am privileged to have the queen as a model for a life of service to the public.”