China’s Communist Party to amend its constitution at October congress 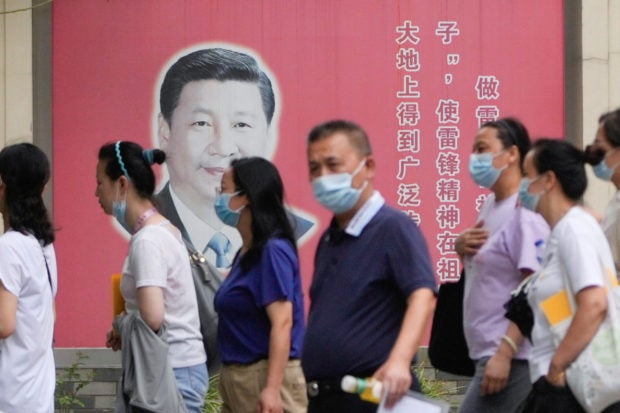 BEIJING — China’s ruling Communist Party will amend its constitution next month during a leadership reshuffle held over five years, a move that some analysts said could consolidate President Xi Jinping’s authority and stature within the party.

State news agency Xinhua said Friday that the Politburo discussed a draft amendment to the party constitution in a meeting chaired by Xi, without specifying the changes.

Xi is widely expected to break with precedent at the congress that starts on Oct. 16 and secure a third five-year leadership term, cementing his status as China’s most powerful leader since Mao Zedong, founder of the People’s Republic.

The party’s constitution was last amended in 2017 to enshrine “Xi Jinping Thought on Socialism with Chinese Characteristics”, a move that burnished Xi’s standing.

Political watchers say one possibility is an amendment that shortens the ideology to “Xi Jinping Thought,” upgrading its stature to that of “Mao Zedong Thought.”

Another possible change that would also be seen as an elevation of Xi’s power would be to enshrine the “Two Establishes,” a recent phrase which means the party establishes Xi as its “core” and his ideas as guiding principles.

Less likely, some pundits have suggested that the constitution could reinstate the paramount position of party chairman, which was abolished in 1982.

The party constitution can only be amended during the once-in-five-years congress.

Xi Jinping and other key leaders of China’s Communist Party

Duterte meets with Communist Party of China leaders in Malacañang

Your subscription could not be saved. Please try again.
Your subscription has been successful.
Read Next
China ambassador: U.N. report on Xinjiang has “closed door of cooperation”
EDITORS' PICK
Only 38% of students grade 1 to 3 prefer local language as medium of instruction — Pulse Asia
House energy committee chair Arroyo bats for cheap electricity
Philippines central bank to focus on inflation at next policy meeting – governor
Omega Speedmaster super racing: Tiny device massive change
vivo Philippines offers a free bouquet of flowers and a premium necklace perfect for Valentine’s Day
ACT slams Edca on 124th anniversary of PH-American war: ‘Tila hindi umalis ang mananakop’
MOST READ
Philippines’ own ‘Anna Delvey’ arrested in Taguig City
Pokwang admits she lied about cause of split with Lee O’Brian: ‘Umasa akong aayusin pa niya’
Vice Ganda asserts all is well with Karylle, takes swipe at ‘kuya’ who chimed in to be ‘trending’
OWWA chief Arnell Ignacio: Socmed manager behind post on my love life
Don't miss out on the latest news and information.