Xi Jinping and other key leaders of China’s Communist Party 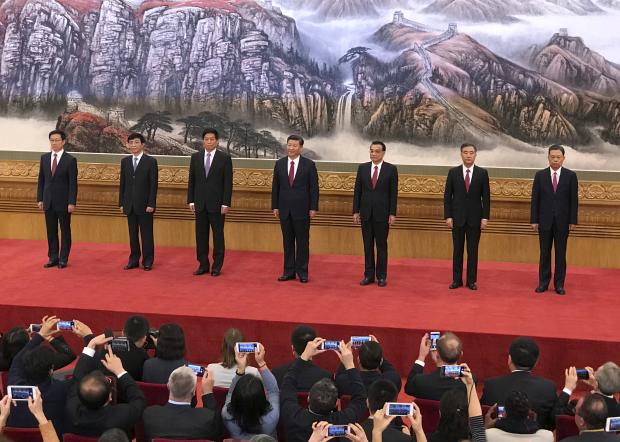 BEIJING — Key members of China’s Communist Party were determined at the national congress, which is held every five years and concluded this week.

On Wednesday, members of the party’s highest body, the Politburo Standing Committee were announced, with President Xi Jinping returning for a second five-year term as party general secretary.

Premier Li Keqiang also remains in place as his No. 2, while the other five members are all newcomers taking the place of those who retired due to unwritten age limits.

Here are profiles of all seven committee members, listed by seniority,

The head of the Communist Party since 2012 and state president since 2013, Xi has established himself as a fervent nationalist and China’s most powerful leader since Deng Xiaoping in the 1980s.

Xi, 64, has worked to reassert the party’s influence across all sectors, including in schools, the media and the private businesses that are driving China’s economy. The son of a communist elder, Xi lived in a cave and performed hard labor during the Cultural Revolution before graduating from prestigious Tsinghua University and being appointed to a series of increasingly prominent provincial posts.

Xi’s first five years in power have seen China adopt an increasingly assertive foreign policy, challenging the U.S. military’s dominance in Asia. A strengthening of the domestic security services has led to what rights groups say is the worst crackdown on activists, political dissidents and the Uighur and Tibetan minority ethnic groups in decades.

With his new mandate, Xi will likely continue such measures while struggling to keep the economy growing fast enough to satisfy the demands of China’s nearly 1.4 billion citizens and their building expectations for improving their quality of life.

He’s also formed a considerable cult of personality and has seen his personal political theory of “socialism with Chinese characteristics for a new era” enshrined in the party constitution.

“History looks kindly on those with resolve, with drive and ambition and with plenty of guts,” Xi said in his speech at the opening of the party congress last week. “It won’t wait for the hesitant, the apathetic or those shy of a challenge.”

Xi is also head of the Central Military Commission that commands the People’s Liberation Army, the world’s largest standing military.

Premier since 2013, Li had at one time been a candidate for the top job, but was ruled out in part because of his close connection with previous leader Hu Jintao. Party elders also were reportedly concerned that he might not be tough enough to ensure the party’s hold on power and lead China into a more dominant global position.

Despite that, Li’s return for a second term on the Politburo appears to display the party’s approval of his administrative skills and ability to maintain a balance between different factions.

Li, 62, was born into a family of minor party officials but parlayed his intellectual skills into a seat at prestigious Peking University, where he earned a doctorate in law. He rose through the ranks to lead the Communist Youth League under Hu’s tutelage, then was appointed China’s youngest governor in 1998 at age 43.

He served as the top official in the provinces of Henan and Liaoning, where he emerged unscathed despite scandals including an AIDS outbreak and rampant organized crime. While nominally in charge of the economy and head of the Cabinet, Li has seen his role diminished under the rule of Xi, who has appointed himself the head of numerous party working groups that have eroded the power of the ministries and other formal offices.

Affable and English-speaking, Li is seen most often in public greeting foreign visitors and paying visits to institutes of learning and high-tech industries. “The people’s livelihood is why we govern,” Li said in his annual address to the national legislature in March. “At times, one needs to place it on one’s heart and carry it on one’s shoulders.”

As director of the party’s General Office, Li effectively serves as Xi’s chief of staff and is a constant presence at his side during state visits and other important occasions. The two men first worked together at the start of their careers as leading officials in adjacent rural townships in Hebei province outside Beijing.

While Xi took on new posts in the country’s dynamic southeast, Li remained in Hebei, eventually rising to head the provincial Communist Youth League and hold other top posts. He was then transferred to Xi’s native province of Shaanxi and then to Heilongjiang in the far northeast, where he was eventually named governor.

From there he served as party secretary for two years in the poor southern province of Guizhou before being called to Beijing in 2012 as Xi was being made head of the party and given a seat on the Politburo.

Unlike his predecessors, Li, 67, plays a prominent role in foreign affairs, and in 2015 was sent by Xi to Moscow to serve as his special representative in talks with Russian President Vladimir Putin. “I believe you and (President) Xi Jinping are leaders of two great nations, two great politicians who have significant influence in the world,” Li was quoted as telling Putin.

Li is expected to take over as chairman of the National People’s Congress, China’s rubber stamp parliament.

In his current role as vice premier, Wang’s most high-profile responsibility is steering talks between the U.S. and China on thorny trade issues. These range from cutting China’s excess steel production to easing restrictions faced by foreign businesses trying to tap into the world’s second-largest economy.

In these talks, Wang has sought to be charming but also firm, saying the sides need to cooperate and warning that “confrontation will immediately damage the interests of both.”

When he was the top leader of Guangdong, China’s wealthiest province, Wang’s favorite political slogan was “free your thinking.” Wang, 62, is widely seen as an economic reformer interested in promoting the private sector and the transformation of China’s economy from one reliant on heavy industries to one that’s driven by consumption and innovation.

Wang is considered closely aligned with now-retired President Hu Jintao; both are from the eastern province of Anhui. In 2011, as Guangdong party chief, Wang boosted his career when he presided over a compromise with protesters in the fishing village of Wukan, where residents had staged an uprising that made the village an internationally known symbol of grass-roots defiance against the party.

Long considered the brains behind Xi’s governing philosophy, Wang has served as director of the party’s Central Policy Research Office since 2002. First transferred to Beijing from an academic career in his native Shanghai, Wang loyally served Xi’s predecessors Jiang Zemin and Hu Jintao in an advisory role, helping define their political outlooks and accompanying them on foreign trips.

Wang and Xi formed a close relationship, and Wang is almost always at the president’s side at important events, along with Li Zhanshu and top foreign policy adviser Yang Jiechi. A prolific author and former champion college debater, Wang, 62, is considered a fierce advocate of centralized power and authoritarian rule.

“The legacy of Wang’s neo-authoritarianism and its cousin, neo-conservatism, lives on today under the reign of Xi Jinping,” wrote American China politics expert Jude Blanchette. “Look at the first five years of Xi Jinping’s administration through the neo-authoritarian lens, and we see a consistent theme: clawing power back to Beijing.”

Wang’s predecessor in the No. 5 slot was in charge of propaganda and president of the party’s main training academy.

Since 2012, Zhao has run the ruling party’s Central Organization Department, which oversees promotions, making him a key figure in Xi’s campaign to promote supporters and tighten control over the political hierarchy.

Zhao, 60, is seen as part of Xi’s “Shaanxi Gang” of figures with family ties to the western province from which their families originally hail. Before moving to Beijing, Zhao was party secretary for Shaanxi and, before that, for the remote western province of Qinghai on the Tibetan plateau, where he was born and spent his early career.

Like Xi, Zhao is a second-generation party member, and unconfirmed accounts say their fathers were friends. Zhao would be one of the youngest Standing Committee members ever and his age would allow him to serve a full 10 years before party tradition would require he step down. That would help to extend Xi’s influence beyond the next leadership change in 2022, when he would be forced to step down as president under term limits.

“Zhao is well positioned on the policy front to carry out several of Xi’s long-standing objectives: the alleviation of poverty and the strict enforcement of regulations on party officials,” politics specialist Cheng Li wrote in a report for the Brookings Institution.

A trained economist, Han worked his way up the political hierarchy of China’s financial hub of Shanghai from a humble start in the chemical industry and at a rubber shoe factory.

He has spent his entire career in Shanghai, advancing over decades to become the city’s mayor in 2003 — then the youngest person to hold that position, at age 48 — and its Communist Party chief in 2012. In 2007, he also served as deputy to Xi, then the city’s party leader, before Xi moved to Beijing.

Han, 63, is known as a business-friendly politician able to rattle off statistics with practiced ease. During his tenure as mayor, Shanghai hosted the 2010 World Expo, which showcased China’s rise as a modern industrial power.

But it was also on his watch that a New Year’s Eve stampede on Shanghai’s scenic Bund promenade killed 36 people at the end of 2014. Earlier in his career, Han emerged seemingly unscathed from a massive corruption scandal centering on Shanghai’s pension fund that resulted in the purge of the city’s former Communist Party chief Chen Liangyu. Chen was sentenced to 18 years in prison in 2008.

Washington’s Brookings Institution said in a report this year that Han was known as “a competent, seasoned financial and economic technocrat” with “market friendly policy orientation in Shanghai.”

Han will likely be made executive vice premier with responsibilities for science, technology and some economic issues.