Baby sloth reunited with mum after evacuation from Bolivia wildfire 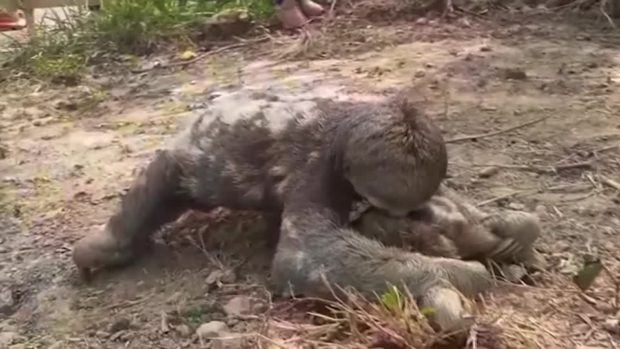 A crying baby sloth was reunited with its mother on Wednesday after the pair were separated following their rescue from wildfires in Bolivia.

Heartfelt video captures the moment the mum tenderly reunites with her baby, bending down in what appears to be a hug and a kiss.

Fleeing the wildfires ravaging the region, the sloths arrived at Trinidad. According to reports, the mother and child were then temporarily separated after fleeing dogs.

The mother and child have undergone vet check-ups and are in good health. They have been released to the Chuchini nature reserve.

More than a dozen forest fires have broken out in the lowlands of Bolivia, threatening at least four nature reserves. The fires in Santa Cruz’s forests, which include three protected areas, showed no sign of stopping on Wednesday despite the work of hundreds of firefighters, residents and volunteers.

Boy or girl? It’s a sloth, so we don’t know yet