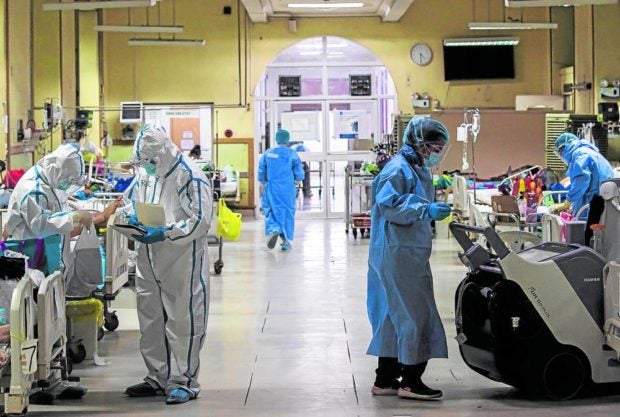 MANILA, Philippines — Health workers on Thursday slammed the government for its proposed health budget for 2023 as it further privatizes public health services for the public by cutting the budget for government-owned hospitals.

In a statement, the Alliance of Health Workers (AHW) said that the budget remains insufficient even though it has been increased from P242 billion in 2022 to P296.3 billion in 2023.

It noted that the budget “gives premium” to PhilHealth while cutting the budget for Maintenance and Other Operating Expense (MOOE) of the government-owned and -controlled corporation (GOCC) hospitals, including the National Kidney and Transplant Institute (NKTI), the Philippine Children’s Medical Center (PCMC), Philippine Heart Center (PHC), and the Lung Center of the Philippines (LCP) by a total of P881 million.

(Many ordinary citizens will be deprived of services especially the expensive procedures at the GOCC hospital due to the MOOE budget cut of P362 million in our hospital.)

(That is equivalent to more than 242 kidney transplant patients who will not be subsidized. The same goes for other GOCC hospitals. In our hospital, a kidney transplant costs P1.5 million excluding maintenance medicine. There is no public hospital they can go to but here at NKT.)

The PGH even had a budget cut of P19.444 million for 2023, with All UP Wokers Union- Manila PGH vice president Benjamin Santos, Jr. noting that despite the lack of lifesaving apparatus like ventilators, there is still no budget appropriated for it.

The group also noted the budget on the Prevention and Control of Communicable Diseases P4.171 billion, as well as on the Epidemiology and Surveillance by P112.9 million.

PhilHealth’s budget, on the other hand, was increased by P20 billion.

(The President knows that the economy is failing and many citizens are in poverty. Instead of ameliorating this situation through free treatment, the large budget went to PhilHealth instead of going directly to the hospitals so that more patients can be treated.)

(Why was the Philhealth fund increased even though the media has released millions of corruption in this agency several times.)