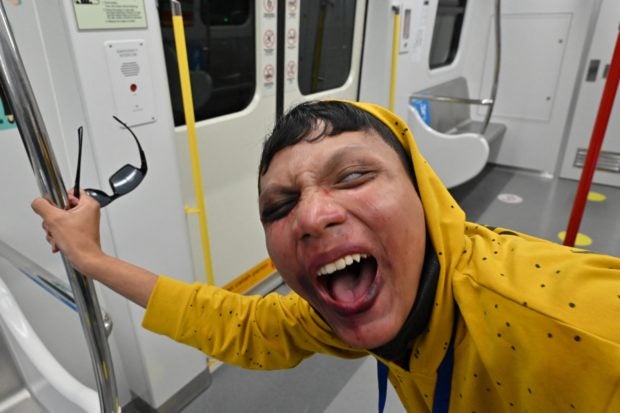 This picture taken on September 4, 2022 shows a performer acting as a zombie on board an LRT coach as part of the “Train to Apocalypse” event, part of an initiative to attract commuters to ride the city’s rapid transit system, in Jakarta. AFP

JAKARTA — In a city known for monstrous traffic, “zombies” are rising up in a scary bid to get more people to use public transport.

That’s the hope of Jakarta’s light rapid transit operator, which has turned a train and station into the set of a bloody zombie apocalypse — with real passengers invited to the show.

The twitching, growling actors are dressed in tattered clothes. One especially scary character shows only the whites of his eyes.

The zombies drag their feet toward passengers, sending them running through the dark station tunnels to a train.

Inside the blood-spattered carriage, a TV anchor — another actor — reports news about a made-up “Pandora” virus outbreak spreading around the city, turning humans into the walking dead.

Soldiers armed with fake rifles fight the “zombies” and try to escort passengers to safety.

But the reanimated corpses lurk, hidden, ready to emerge and terrorize.

“Danger, beware of zombie” warns a sign in the station, where red emergency lights pulse.

“The zombies didn’t actually chase us but we were still panicking,” said Genesis Christi, a 17-year-old zombie enthusiast.

Called the “Train to Apocalypse”, the event is inspired by the 2016 South Korean horror film, “Train To Busan”.

“We want to tell young people that taking public transportation can be something cool too,” Billy Junior, CEO of Pandora Box, told AFP.

Home to more than 30 million people, heavily polluted Jakarta has some of the world’s worst traffic congestion, and its uneven pavements mean it is not conducive to walking.

Transport analysts cautioned at the time that the new line and cheap prices alone would not cure the city’s infatuation with private vehicles.

The organizers promised the 20-minute ride does not disrupt the trips of regular LRT passengers. Even without participating, they can catch a glimpse of the horror show for free.