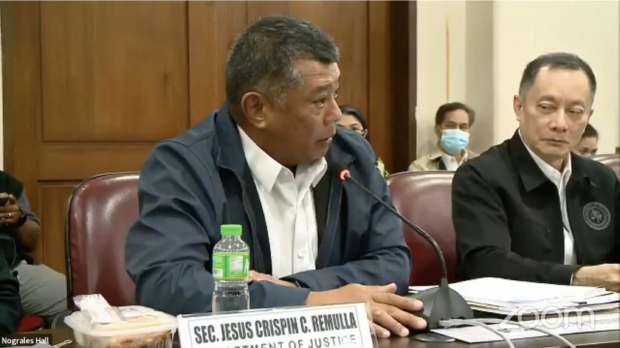 MANILA, Philippines –Despite a five-minute interpellation from House Deputy Minority Leader and ACT Teachers Rep. France Castro, the Department of Justice’s (DOJ) proposed budget of P26.6 billion was approved by the House Committee on Appropriations on Wednesday

After the DOJ presented its proposal, Rep. Edcel Lagman of Albay 1st District first moved to end the budget briefing and hearing without interpellation, with the caveat that the committee and House members could ask their questions during the plenary deliberation.

However, Castro, the lone interpellator, brought up the topic of extrajudicial killings (EJK). She asked the DOJ for updates on the AO 35 Committee’s investigation into the “Bloody Sunday” tragedy.

After the interpellation, the House Committee on Appropriations voted to terminate the budget briefing of the DOJ and its attached agencies.

Last Friday, the Office of the President’s proposed budget also passed swiftly through the House Committee.

Rep.Elizaldy Co, chairman of the House Committee on Appropriations, cited the creation of the Prosecution Integrity Board and other programs of the DOJ as it pushed for the approval of the agency’s budget.

“We laud Secretary Remulla’s first official order as head of the DOJ to create the Prosecution Integrity Board,” Co said in a statement on Wednesday.

Co also lauded Remulla for his initiatives like the creation of the Case Decongestion Task Force and adoption of the “e-inquest” and “alternative preliminary investigations”.

“With the proposed budget of P28.2 billion for fiscal year 2023, we look forward to all DOJ plans and programs to ensure that justice is served efficiently and appropriately,” Co said.

—WITH A REPORT FROM JOHN ERIC MENDOZA