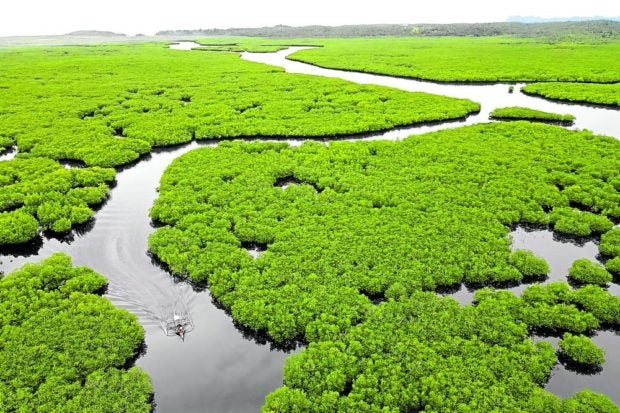 PH’S LARGEST MANGROVE FOREST | A passenger boat on Thursday navigates a section of the 4,871-hectare mangrove forest of the town of Del Carmen on Siargao Island, considered as the largest contiguous mangrove stand in the Philippines. (Photo by ERWIN MASCARIÑAS / Inquirer Mindanao)

DEL CARMEN, SIARGAO ISLAND, Surigao del Norte, Philippines — Scientists belonging to the National Research Council of the Philippines (NRCP) and local government officials have released a science video package here that seeks to educate schoolchildren on the importance of the different species of wildlife found on Siargao Island.

Dr. Cecilia Banag-Moran, a member of the NRCP Division V that deals with biological sciences, helped launch the science video, titled “Worth More than Gold: Siargao’s Biodiversity,” at the town’s Bayay Numancia on Thursday.

The video is intended to become a supplemental science learning material for students in Grades 4 to 10 to inculcate in the younger generation an appreciation for the beauty of Siargao.

Considered the first of its kind, the animated video package consists of a series of 21 videos featuring the seven groups of animals and three videos for each of the groups of amphibians, arthropods, birds, crustaceans, fish, mammals and reptiles.

Banag-Moran said during the launching that the video being played was the result of the first phase of the study conducted in the town of Del Carmen, one of the nine municipalities in Siargao and is where the airport is located.

She said the featured animals in the video could all be found on the island of Siargao, specifically in the vast mangrove forest of Del Carmen.

Mayor Alfredo Coro II, who spearheaded the now decade-long environmental conservation and protection campaign in Del Carmen, said the launching of the science videos would be the start of an intergenerational campaign to ensure that the children of Siargao would understand and appreciate what they have in their place.

“We are finally telling the story of truth, the truth of what we have in our ecosystem, the truth that we tried to protect for the past few decades. We have 21 species [of animals featured in the science video] and we will have more because this is our way of ensuring that the next generation will appreciate what we are protecting and fighting for,” Coro said.

Experts have considered the mangrove forest of Del Carmen as the largest contiguous mangrove forest in the Philippines covering an estimated 4,900 hectares. Scientists who were part of the research expressed optimism they would discover new species of flora and fauna within the inaccessible parts of the forest.

Aside from linking up with the local government of Del Carmen, the NRCP said they also forged partnerships with the Caraga regional offices of the departments of education, tourism, and environment and natural resources to make these videos more visible among kids and tourists in schools and airports.

“The videos will not only attract more tourists but will also make them acknowledge the exquisiteness of Siargao with its biodiversity and the presence of various animals on the island,” the NRCP said in a statement.

The state research institution pointed out that the videos would also support Siargao’s economic recovery and rehabilitation after Typhoon “Odette” (international name: Rai) devastated the island in December 2021.

As Siargao reopens, local tourism expected to pick up