BUTUAN CITY—Humanity’s reset due to the coronavirus pandemic turned out to be a great time for reptiles to thrive on Siargao Island, a tourism haven in Mindanao and known for its beaches and world-class surfing spots.

Due to the lockdowns and quarantine restrictions, disturbances to the natural habitat from human activities were radically reduced, giving crocodiles and sea turtles the opportunity to flourish, according to scientists and conservationists.

As tourism ground to a halt in Siargao, environmental officials in the coastal town of Del Carmen in Surigao del Norte province saw a record number of sea turtle rescues.

From March to November last year, the Municipal Environment and Natural Resource Office (Menro) listed incidents of rescue and eventual release of 25 sea turtles after these were tagged.

Another 23 were turned over by fishermen to the village council of Caub, of which five have already been released. The rest are awaiting tagging by the Department of Environment and Natural Resources before they are returned to the sea.

The reptiles were mostly trapped in fishnets and cages as they swam toward the now empty beaches.

“This is the first time that we have recorded this many rescued and released sea turtles in more than two decades. We believe that this is a result of the COVID-19 restrictions as it has kept humans and harmful waste off beaches,” said Gina Barquilla, coordinator of the town’s Bantay Dagat and designated environment officer.

A Menro report showed varying sizes and species of the turtles that were rescued and released.

“It’s amazing because the turtles that we rescued were the green sea turtle and the critically endangered hawksbill sea turtles, and they [came in] different sizes, suggesting that juveniles to adult sea turtles thrive within our waters,” Barquilla said. 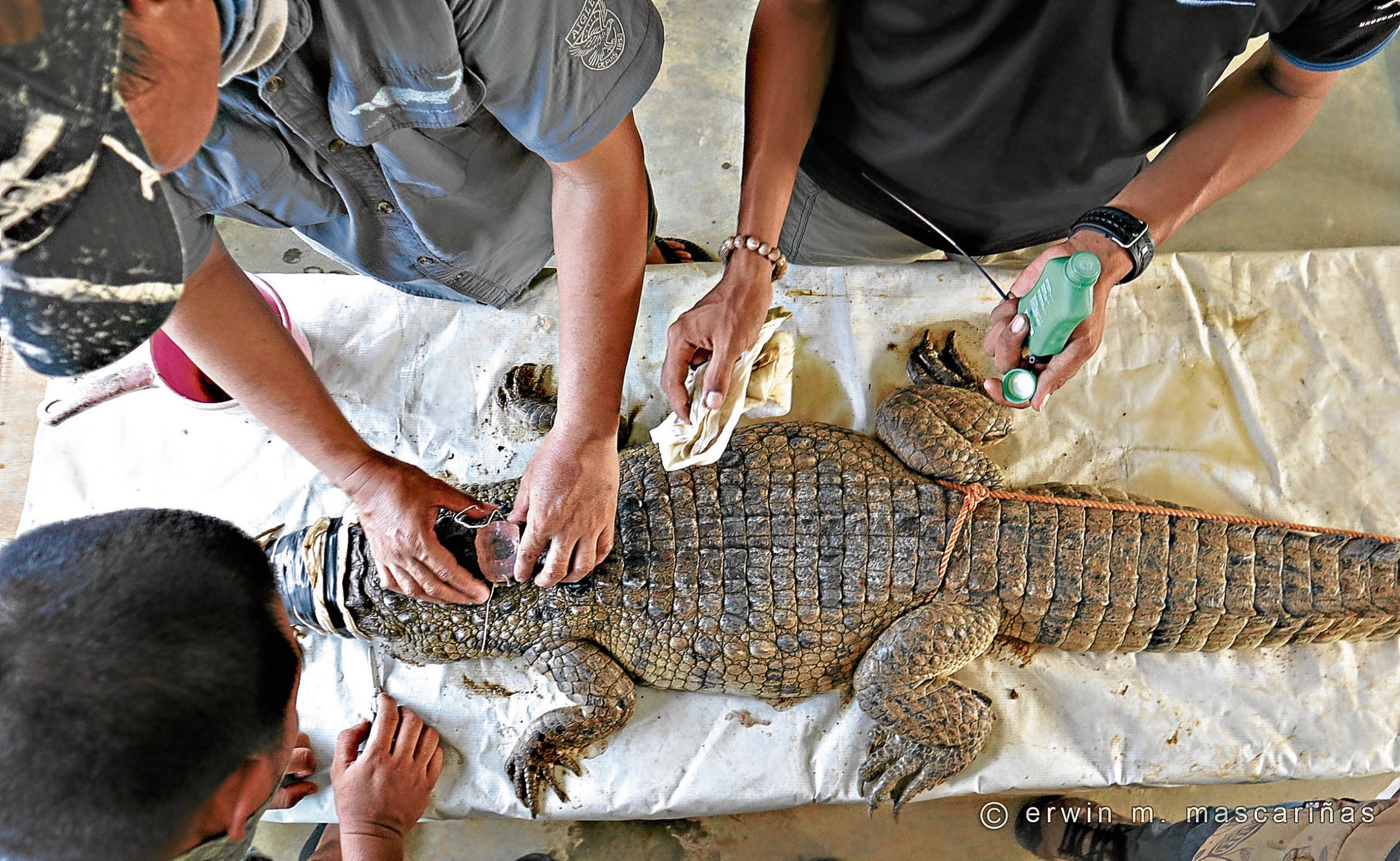 A team from a conservation group uses a radio transmitter to monitor the movement of a Philippine crocodile after it is released into the wild. —ERWIN MASCARIÑAS

Del Carmen Vice Mayor Alfredo Matugas Coro II, who led the town’s environmental management campaign, said the phenomenon could be attributed to the ocean healing itself.

“With the travel restrictions, with less people in the ocean, we’ve given our ecosystem a time to breathe, to heal, a moment to allow nature to recover by itself,” he said.

Boosting the healing process, according to Coro, is the effort by government and nongovernment agencies to protect and conserve the town’s rich marine ecosystem.

Wendie Goña of Sentro para sa Ikauunlad ng Katutubong Agham at Teknolohiya Inc. noted that the act of fishers to turn over trapped sea turtles was a big turnaround from the previous practice of harvesting these for meat.

Sea turtles are indicator species of the health of marine ecosystems, said Julius Guirjen of the conservation group Rare Philippines.

“If you have sufficient numbers of sea turtles in the ocean, it could be that there’s abundance of food, the habitat is conducive for them to live. If it’s peaceful, there’s less disturbance, it is preferable for them to live in that place,” he said.

There were also reports of sea turtles rescued and released in the other coastal towns of Burgos and General Luna, Guirjen said. 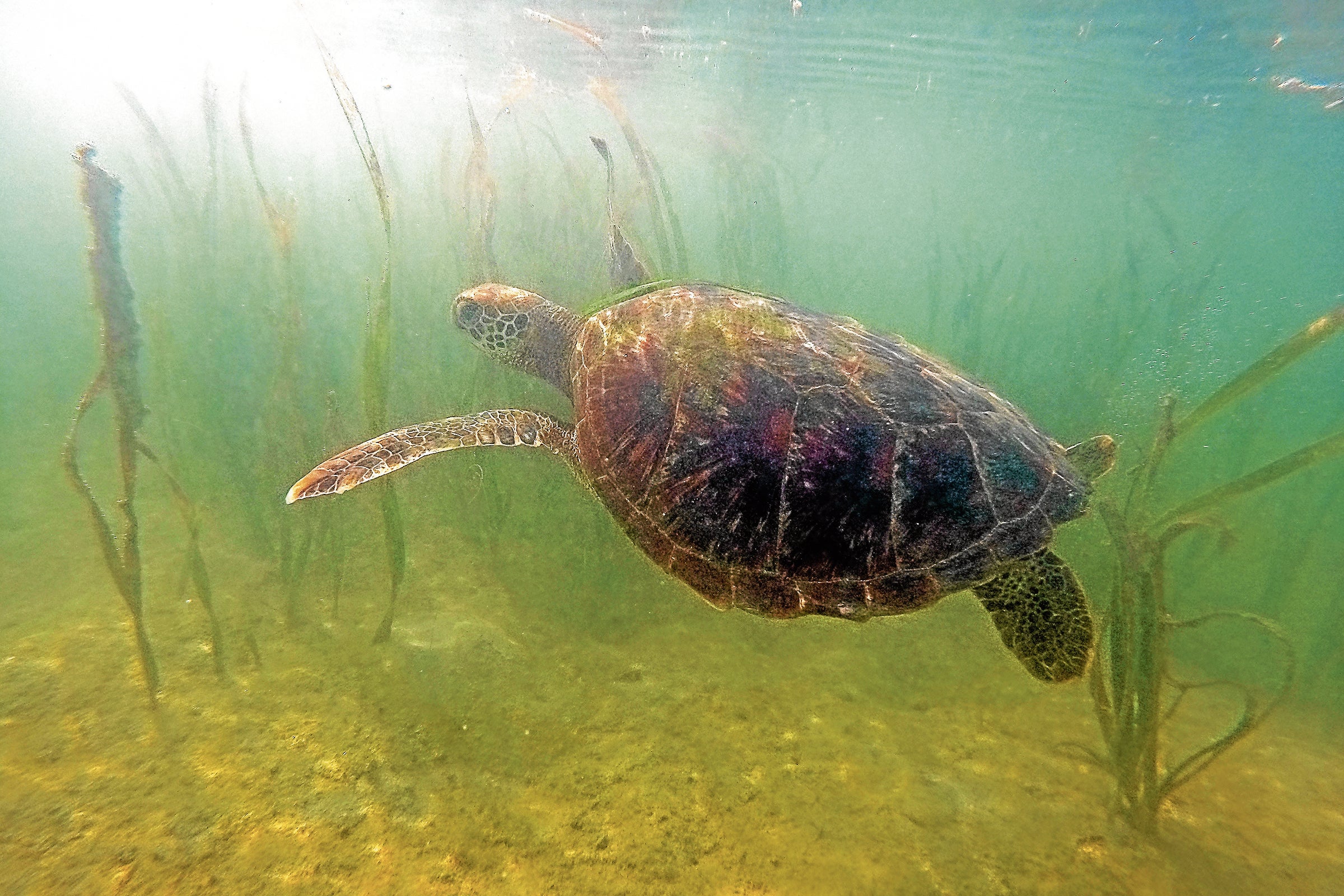 Populations of reptiles on Siargao Island, like this crocodile resting on a bank at Paghungawan Marsh in Pilar town and green sea turtle in Del Carmen town, have been left undisturbed during the pandemic. —ERWIN MASCARIÑAS

“I think it’s not only marine turtles. There were also several sightings of marine mammals here in Siargao, dolphins in particular,” he added.

The eerie silence of Siargao’s tourist sites may have also given the shy Philippine crocodile (Crocodylus mindorensis) the chance to reproduce in the wild.

According to marine biologist Rainier Manalo, program head of crocodile research and conservation of the Crocodylus Porosus Philippines Inc. (CPPI), crocodile eggs have been found in nesting sites and are expected to hatch this month.

“We have a new hope for 2021, it will be an exciting year for the Mindorensis,” Manalo said.

Most of the current reproduction of this reptile is in the highly controlled environment of crocodile conservation farms.

“This is the first in the Philippines, a hugely significant development in the conservation program,” Manalo said.

He said the eggs and nesting sites indicated a successful introduction of the critically endangered species in the wild.

In an effort to save the dwindling species, 36 juvenile Philippine crocodiles were released in Paghungawan Marsh in Pilar town in 2013 as part of the Siargao Island Crocodile Research and Biodiversity Conservation Project within the 279,000-hectare Siargao Island Protected Landscapes and Seascapes area.

Four years later, 29 other juveniles were introduced in the same wetland.

On Nov. 8, 2020, two nests with eggs were found by community-­based scientists who have been constantly monitoring the area. The eggs were estimated to have been laid last October and were expected to hatch this month.

The finding provides evidence that the released Philippine crocodiles are not only surviving and thriving in the wild but are also able to reproduce, Manalo said.

He said similar projects were done in 2009 in Isabela province in Luzon, but the reintroduced crocodiles were already subadult, which had a hard time adapting as they were too old to learn how to hunt and hence dependent on being fed in captivity.

“When we introduced the crocodiles in Siargao Island, we had to make sure that we brought in juveniles from the parent stock in Palawan and then we placed them in a semiwild enclosure in Kapalong, Davao del Norte province before we released them in Pilar’s Paghungawan Marsh,” Manalo recalled.

The CPPI team is not expecting any egg nesting this time of the year as Philippine crocodiles are known to lay their eggs between March and July.

“This is an odd mix as we did not expect to find nested eggs around this time of the year, but since this is the first time for them to lay eggs, we still need to further observe and study this behavior,” Manalo said.

“We are not expecting a high rate of survival for the hatchlings, but we are very optimistic that next breeding season in 2021, we will find more nests,” he added.

“We have come full circle. After years of hard work, this is the culmination of our efforts,” Manalo said. “Of all the reintroduction and introduction programs, this is what we have been waiting for. Hopefully, in 2021, we will see the next generation of crocodile offspring in the wild.”