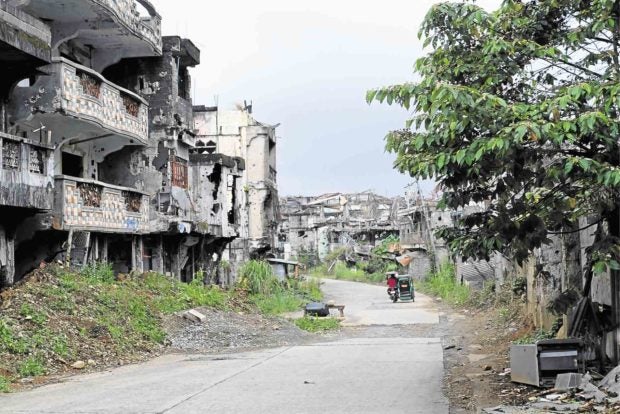 LONELY ROAD | A tricycle negotiates an empty road in Marawi City’s center, a business district that was destroyed by the five-month fighting between government troops and terror groups in 2017. The ground zero of the siege has yet to be rebuilt. (Photo by BONG S. SARMIENTO / Inquirer Mindanao)

MANILA, Philippines — Five years after the Marawi City siege, P1 billion has been set aside in next year’s proposed national budget to compensate residents who lost their property during the five-month-long conflict.

In a statement on Sunday, Surigao del Sur Rep. Johnny Pimentel said the allocation was for the Marawi siege compensation fund, as provided by Republic Act No. 11696, or the Marawi Siege Victims Compensation Law of 2022, which was signed into law in April by then-President Rodrigo Duterte.

“The item is lodged in the P31-billion calamity fund for next year,” Pimentel, who is vice chair of the House committee on good government and public accountability, pointed out.

According to the Mindanao lawmaker, the P1 billion fund will be used to compensate, tax-free, residential and commercial property owners in Marawi whose structures were destroyed or damaged in the 2017 Marawi siege or whose properties were demolished as part of the Marawi Recovery, Rehabilitation and Reconstruction Program.

Also to be compensated are lost equipment or personal property of value, such as appliances and jewelry.

“We expect the compensation payout to rev up reconstruction activities in Marawi by private property owners,” Pimentel pointed out, adding, “the private rebuilding activities in turn will have a multiplier effect on the local economy in terms of creating new jobs and income that tend to benefit low-income households.”

The five-month-long conflict in 2017 left Marawi City in ruins with 95 percent of structures in 24 barangays heavily damaged or totally collapsed due to sustained aerial and artillery bombardment. Over 200,000 persons were displaced by the siege.