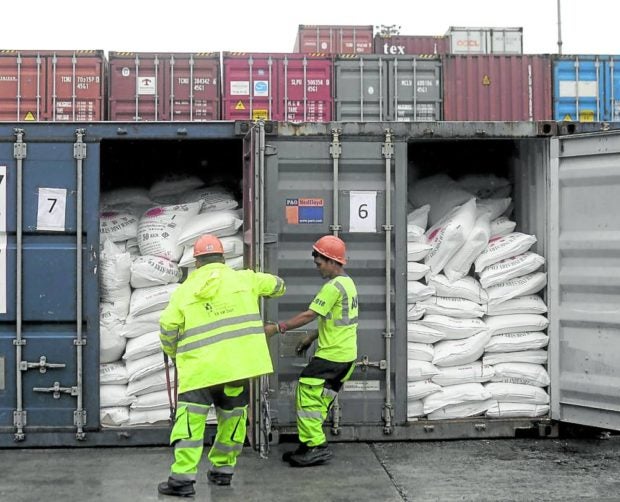 MISDECLARED | P39 million worth of sugar declared as packaging materials and kitchen utensils were found inside 45 containers at the Port of Manila. It was shipped from Thailand. —RICHARD A. REYES

MANILA, Philippines — The Bureau of Customs (BOC) again surpassed its collection target in August because of improved tax administration and higher duties on expensive oil.

In a statement on Sunday, the BOC said it collected P78.9 billion in import duties and other taxes last month. The actual take was 34.1-percent higher than the P58.8-billion goal, the BOC said, citing a preliminary report from its financial service.

It was the eighth straight month this year that the country’s second-biggest tax-collection agency exceeded its monthly target.

In August, “all 17 ports surpassed their targets and cumulatively achieved a P15.8-billion, or 25-percent surplus, through intensified collection efforts under the present leadership,” the BOC said.

According to the BOC, Customs Commissioner Yogi Filemon Ruiz had ordered district collectors to “plug revenue leakages,” which included outright smuggling as well as technical smuggling, such as misclassification, misdeclaration, and undervaluation of import shipments.

From January to August, the BOC’s collections totaled P559.2 billion, up 35.6 percent, from the P412 billion it collected during the first eight months of last year.

“The collection performance of the BOC and its 17 collection districts, under the leadership of Commissioner Ruiz, is attributed to the intensified collection efforts, streamlined, digitized and modernized systems and the improving economy resulting in higher volume of imports,” it said.

In July, the BOC’s tax revenues hit a monthly record-high of P84 billion as import values surged, especially of oil products. The Philippines is a net oil importer.

The Cabinet-level Development Budget Coordination Committee expects imports this year to grow by 18 percent due to increased consumer spending as well as increased commodity prices due to the Russia-Ukraine war and pandemic-induced supply chain disruptions.

As of end-June, imports jumped 26.7 percent year-on-year to $68.3 billion, the latest Philippine Statistics Authority data show and the country’s economic managers tasked the BOC to collect P722 billion for the entire year, bigger than the original P679-billion goal for 2022, to reap a tax windfall from costly fuel imports.