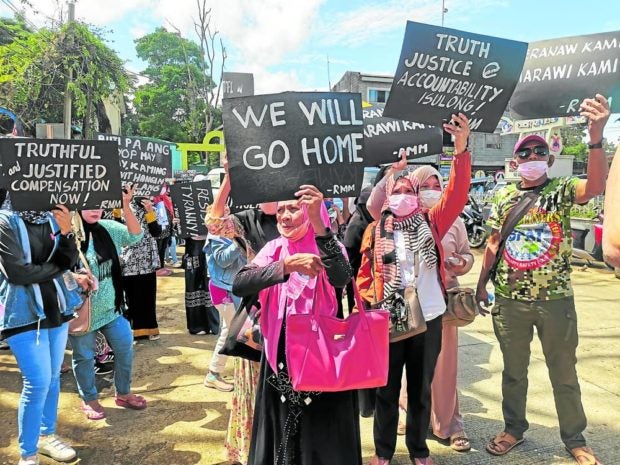 YEARNING FOR HOME Maranaos displaced during the 2017 Marawi siege and members of civil society groups, in a May 23 march and rally, call on the government to speed up the release of compensation so they can rebuild their homes.—DIVINA M. SUSON

ILIGAN CITY—Local officials are seeking more time to settle disputes over land in Marawi City’s war-ravaged villages in order to pave the way for the rebuilding of homes.

Minalang Barapantao of the Bangsamoro Autonomous Region in Muslim Mindanao’s Ministry of Human Settlements and Development (MHSD) said they wanted the dispute resolution effort extended to at least the year’s end.

The MHSD has created the land dispute resolution committee (LDRC) and partnered with the Task Force Bangon Marawi (TFBM) to resolve competing land claims over the city’s so-called “most affected area” (MAA), its main commercial district where the five-month fighting between Islamic State-linked armed groups and the government happened in 2017.

The LDRC has documented such disputes in four of the MAA’s 24 villages, Barapantao told the radio program Alerto Bangsamoro over Cotabato City-based dxMS on Thursday.

Some 896 claims have been forwarded to the City Assessor’s Office for verification, he added.

Barapantao also revealed that 106 additional conflicting claims were discovered by the environment department and, so far, they resolved 49 cases.

The LDRC called the individuals involved in the claims to a meeting although Barapantao said the process overseen by the agency was voluntary.

“We cannot force the clients to submit to the process of the LDRC,” he said. 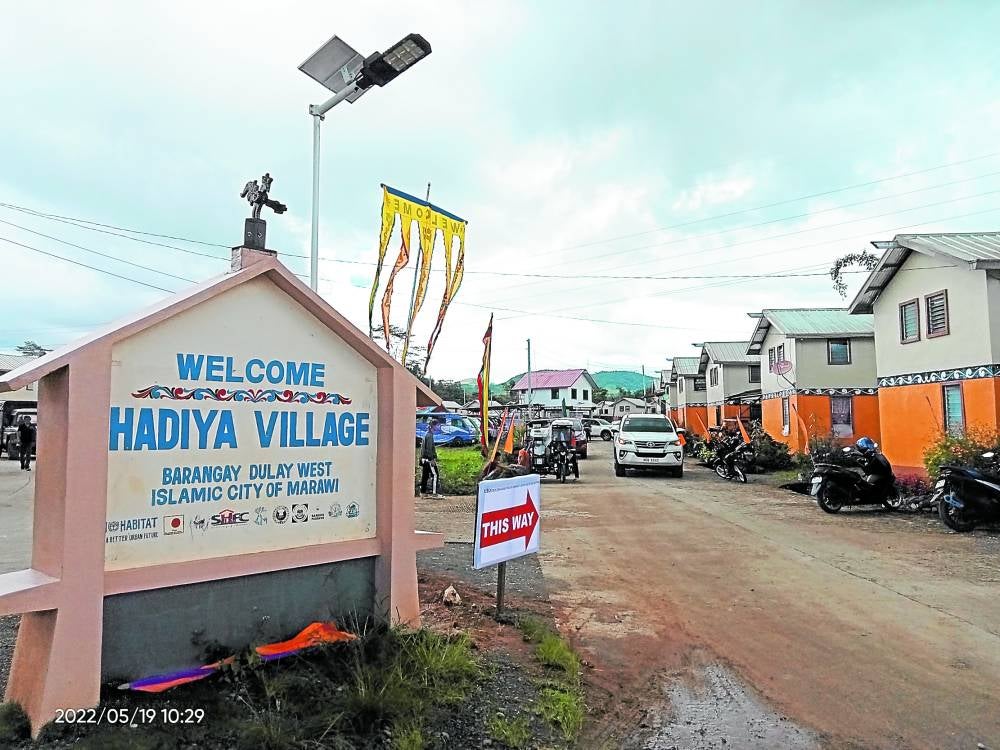 On May 30, the United Nations Human Settlements Programme will end its Rebuilding Marawi Project with 1,000 permanent houses turned over to beneficiaries. —DIVINA M. SUSON

The TFBM requires families intending to rebuild their homes in the MAA to apply for building permits with the local government’s Office of the Building Official. There, one had to establish ownership of the land.

Barapantao said that given the cases they had yet to resolve, the LDRC had asked the TFBM to extend the dispute resolution operation.

He said that they even expected more land conflicts to arise as more families planned a return to their old communities and also in light of the impending payments for damaged structures and properties through the Marawi Siege Victims Compensation Law (Republic Act No. 11696).

Apart from immediately extending its mandate, the LDRC may need to be institutionalized through an act of the interim Bangsamoro parliament, especially in support of the soon-to-be organized Marawi Compensation Board (MCB), Barapantao said.

The LDRC, he said, has established a database, with the help of organizations, such as International Alert Philippines, which can be helpful in assessing the compensation claims of displaced families.

According to TFBM spokesperson Johary Lumna, a little more time is needed before the MAA is completely opened for resettlement by former residents, citing that power supply has been restored there while pipes were already laid and now await bulk water supply.

Lumna said that based on their dialogues with displaced families, many were looking forward to the compensation for their lost properties so they could rebuild their homes.

The TFBM has already started updating the damage and loss assessment of properties affected by the siege.

Lumna said that if the pace of the displaced families’ return to MAA picked up, there might no longer be a need to maintain many transitory shelter sites. In many sites, the agreement for the use of the land with private owners will expire early next year.

Among families who may not be able to return or be given permanent shelters in time, they will be transferred to other sites covered by agreements with a longer period of use, Lumna assured.

He said talks between owners and the local government were ongoing regarding the possible extended use of the transitory shelter sites.

Apart from apprehensions about their continued use of the temporary relocation areas, families living in transitory shelters grapple with the same problems five years ago.

Lovely Pacasum, a youth leader in the Sagonsongan site, said that, for one, the supply of potable water remained a big challenge. Delivery trucks bring water to relocation sites, for free, based on a weekly schedule. If not, one had to buy at the water refilling stations.

Some sites are far from the downtown area, which will cost residents P50 to P100 in motor cab fare. This heavy cost of transportation led to some families foregoing the education of their children as in-person classes resume, Pacasum noted.

Jalilah Sapiin, a member of Marawi Reconstruction Conflict Watch, said they were expecting the situation could be eased with the provision of compensation by the government.

She hopes that those who will compose the MCB “will have a deep understanding of Maranao culture and context, and will push for equity and deliver justice to Marawi siege victims.”