Economist Monsod: Is it necessary to change 30-year-old Constitution? 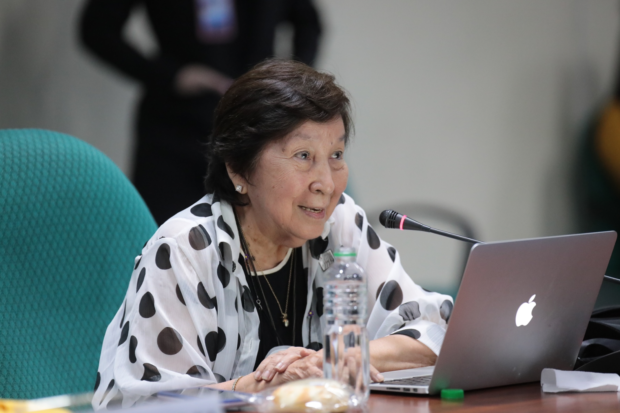 Solita Monsod, Professor Emeritus at the UP School of Economics, shares her views on the proposal to amend the economic provisions of the Constitution during the hybrid public hearing of the Committee on Constitutional Amendments and Revision of Codes on Friday, September 2, 2022. Senate PRIB photo / Voltaire F.  Domingo

MANILA, Philippines — “Is it necessary to change the Constitution because it’s 30 years old?”

Economist Solita Monsod raised the question during the Senate committee on constitutional amendments and revision of codes’ hearing on the review of the 1987 Constitution on Friday.

Monsod made the assertion when Senator Robin Padilla, chair of the Senate amendments panel, said they are pushing to revise the Constitution.

“I respect your opinion, Senator Padilla, but I stand by my opinion that it’s neither necessary nor sufficient,” said Monsod.

“I mean is it necessary to change the Constitution because it’s 30 years old? I mean the United States Constitution is over 200 years old,” she continued.

Studying Resolution of Both Houses No. 1, filed by Senator Sherwin Gatchalian and being deliberated by the panel, Monsod noted that studies do not back the measure’s assumptions that foreign direct investments (FDI) will lead to growth and other positive outcomes.

“Amending the Constitution is neither a necessary nor a sufficient condition to attract FDI and may entail, burden some cost,” the expert said.

Monsod refuted the first and second clauses stated in the resolution, saying it is inaccurate and not based on evidence, respectively. — with reports from Christian Paul Dela Cruz, INQUIRER.net trainee