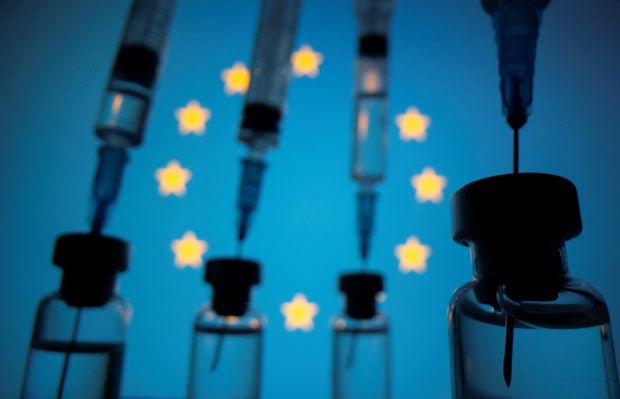 Vials and syringes are seen in front of displayed EU flag in this illustration photo taken March 16, 2021. REUTERS/Dado Ruvic/Illustration/Files

The European Union’s drug regulator on Thursday backed two separate COVID-19 vaccine boosters updated to target the Omicron variant and developed by Moderna and the team of Pfizer and BioNTech.

Europe is preparing to roll out shots ahead of an anticipated rise in infections this winter.

The new so-called bivalent shots combat the BA.1 version of Omicron and the original virus first detected in China.

The recommendation is to authorize the vaccines for people aged 12 years and above who have received at least primary vaccination against COVID-19, the European Medicines Agency (EMA) said.

The final go-ahead will be subject to European Commission approval, which is expected to come in shortly.

The latest EMA recommendations come as Pfizer’s booster retooled to target the currently dominant BA.4/BA.5 variants along with the ancestral coronavirus strain has already been submitted for EU review, while Moderna’s submission is imminent.

The EMA is expected to also offer its opinion on BA.4/5 adapted vaccines in the coming weeks, European Commissioner for Health and Food Safety Stella Kyriakides said in a statement on Thursday.

EU officials signaled in recent months they were open to initially using shots targeting the older BA.1 variant, given those specifically targeting newer Omicron offshoots BA.4/5 are further behind in development.

In contrast, the U.S. Food and Drug Administration (FDA) insisted it was only interested in vaccines targeting BA.4 and BA.5. On Wednesday, Pfizer-BioNTech and Moderna secured U.S. approval for those shots.

Given BA.1 emerged first, data from human trials testing the adapted vaccines from sets of developers has been submitted to EU regulators. For the BA.4/5 adapted vaccines, submissions to US regulators are based on lab and animal data.

Using animal and lab data to solicit regulatory approval for retooled vaccines is not without precedent – it is done regularly for flu vaccines that are revamped each year to combat new variants.