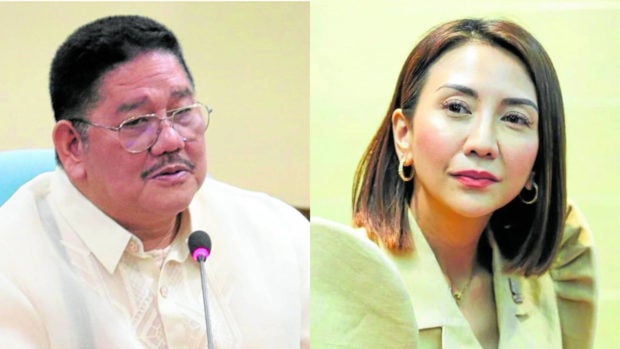 Rep. Marcelino Libanan and Tourism Secretary Christina Frasco (Photo from the Facebook account of the Department of Tourism)

MANILA, Philippines — Lawmakers at the House of Representatives are looking to quadruple to P12.2 billion the Department of Tourism’s (DOT) proposed P3.2-billion budget for next year to enable the agency to regain its competitive edge and achieve its thrust of turning the Philippines into a tourism powerhouse in Asia.

Under the budgetary process, an agency suggests a budget for a given year based on its projected expenditures and projects. This figure is forwarded to the Department of Budget and Management (DBM), which scrutinizes the numbers and either gives or reduces the requested amount in the National Expenditures Program it submits to Congress for approval.

In reply, Frasco informed the committee: “The proposal that we presented to DBM was P12.2 billion… The approved budget given to us was P3.2 billion.”

“It’s like we got the finest soldier, who’s inspiring, to go to war armed with a machete against enemies with bazookas. How can we compete with other countries (in terms of tourism)?” Libanan remarked, noting that tourism receipts in 2019, or before the pandemic, reached $9.3 billion. Tourism receipts account for money spent by tourists while in the Philippines and these help fuel the country’s economy.

“I think we need to increase the budget because our country needs to recover. The DOT has a clear plan. Our country can recover economically if the agency is well-funded,” he added.

In response, Frasco said, “I have no objection whatsoever to (Libanan’s) position that, indeed, the funding for DOT should be equal to the expectations as well as the potential for it to deliver in terms of economic contribution.”

“To highlight the contribution of our tourism industry to our economy, I wish to point out that our tourism industry contributes at least 12.9 percent to our gross domestic product. Yet comparatively, the budget of DOT accounts for 0.63 percent of the entire national budget,” she pointed out.

The P3.2-billion allocated spending for the DOT, as prepared by the DBM, did not allocate funds for projects under the agency’s proposed Tier 2 programs, or for tourism infrastructure development and infrastructure repair and rehabilitation.

“I have no Tier 2 to speak of at the moment and, therefore, there would be no funding for repair of these damaged structures (from calamities) if we are to singularly rely on the DOT,” she pointed out.

Frasco assured the lawmakers that she has asked the Tourism Infrastructure and Enterprise Zone Authority (Tieza) to “closely coordinate with our department so whatever piecemeal assistance that we can give our regions, with the limited budget that we have, we can do so. From our end it’s a matter of prioritization, considering the availability or nonavailability of budget for that matter.”

She pointed out that the establishment of a contingency fund for the DOT was also among the policy recommendations so the agency could easily access it in case of disasters.

“As of this time, when disasters strike any of our tourism establishments, we turn to our fellow agencies especially in providing social protection to our tourism workers. A contingency fund for DOT would greatly help us respond immediately to calamities and disasters,” Frasco said.

According to House committee on tourism chair and Romblon Rep. Eleandro Jesus Madrona, “one thing is very clear, the DOT has this [small] budget but the expectation is [huge]. We have heard no less than the President say tourism is one of the drivers for economic development, but how can you be a driver for economic development when you have this much to spend?”

“It is my request that, of course I will not endorse the P3.2-billion budget of DOT. I am endorsing the maximum of P12.2 billion which I understand is composed of 7.6 billion for Tier 1 and the remaining for Tier 2. I think by then, probably, we can expect a lot of success and I will be very proud, as chairman of committee of tourism, to see that our tourism industry here will boom,” he pointed out.

Frasco also confirmed plans to fully open Mindanao to tourism and told lawmakers that her agency was already closely coordinating with the Department of National Defense (DND).

During the committee hearing, Frasco said that there were current efforts to fully open Mindanao to tourism.

“One of the first declarations I made in taking the tourism portfolio is that we would ensure to fully open Mindanao to tourism and one of the essential components of that, of course, is the continued peace and order of the region,” she noted.

“We are already presently coordinating with DND to ensure that the reopening of Mindanao for tourism would proceed in a manner that ensures the full maximization of the local government units’ potential in the area,” the tourism secretary pointed out, adding that 30 percent of the DOT’s budget has been set aside for this effort.