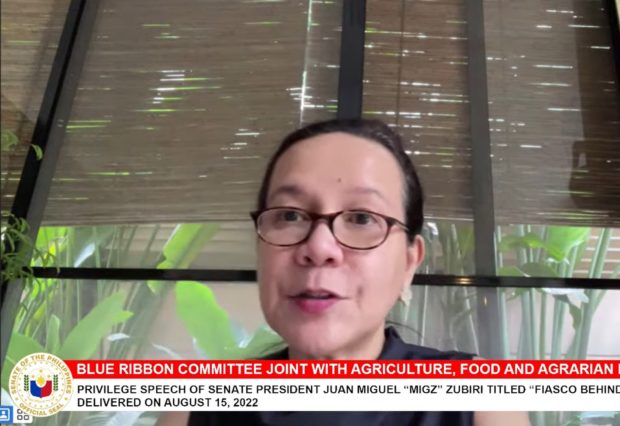 MANILA, Philippines — Senator Grace Poe on Tuesday suggested setting aside some P20 from selling every kilo of imported sugar to support the sugar industry.

Poe floated this idea during the Senate blue ribbon committee hearing on the sugar importation fiasco on Tuesday, citing the massive difference between the price of sugar in the world and domestic markets.

“For every 300,000 metric tons we import, we’ll have P3 billion to give to our farmers. Kung 150,000 tons lang, that’s still P1.5 billion extra that we can give to the sugar industry to subsidize them, and at the same time, our consumers would stand to save P28 per kilo,” she said.

(For every 300,000 metric tons we import, we’ll have P3 billion to give our farmers. If we only have 150,000 tons, that’s still P1.5 billion that we can provide to the sugar industry to subsidize them, and at the same time, our consumers would stand to save P28 per kilo.)

According to Poe, international sugar prices are at P22 per kilo, while the lowest retail price in the country is P70 per kilo.

The Philippine Food Processors and Exporters Organization Inc. later pointed out that the estimated cost of imported sugar in the country is P35 per kilo, but the cost of sugar for food manufacturers in Thailand and Vietnam is less than P30 per kilo.

The group further stated that the industry can still operate competitively as long as the sugar price does not exceed P50 per kilo.

Poe urged the Department of Trade and Industry (DTI) to do a computation to “liberalize the industry a little bit” when facing a shortage.

The retail prices of sugar in the country are now at P100 per kilo. However, with the P70 per kilo available only in select outlets, the lawmaker argued that trimming down the retail cost of sugar to P55 will still give consumers a reprieve.

She then called on the government to assess the timing of importation and harvest season to balance the interests of both consumers and local producers.

“I really think we can support the industry by adding a little bit of tariff and that tariff will not even disadvantage consumers because it will still come out cheaper,” Poe said.

She added: “I support the sugar industry but I should also advocate for our consumers who are clearly the ones getting the short end of the bargain.” — Christian Paul Dela Cruz, Inquirer.net trainee