MANILA, Philippines —Tropical Depression Gardo and Super Typhoon Hinnamnor may interact, a phenomenon that could enlarge the storm and whip up the southwest monsoon, which is expected to continue during the next few days.

Gardo, formerly a low-pressure area off extreme Northern Luzon, was sitting 1,185 kilometers east of the area on Tuesday evening and bringing winds of 55 kph with gusts of 70 kph, according to the weather bureau’s bulletin.

Super Typhoon Hinnamnor, on the other hand, was still outside the Philippine area of responsibility (PAR) as of the latest bulletin of the Philippine Atmospheric, Geophysical and Astronomical Services Administration (Pagasa). It was located 1,485 kilometers east-northeast of extreme Northern Luzon with maximum sustained winds of 185 kph and gustiness of up to 230 kph. Hinnamnor will be assigned the domestic name “Henry” once it enters PAR on Wednesday night.

(Their interaction may enlarge the radius or diameter of Severe Typhoon Hinnamnor, which will locally be named Henry, so it will gain strength and further enhance the southwest monsoon).

Pagasa, however, said that while neither Gardo nor Hinnamnor is expected to hit land, there is still a chance that the weather events will raise a tropical cyclone wind signal over extreme Northern Luzon in the next few days. 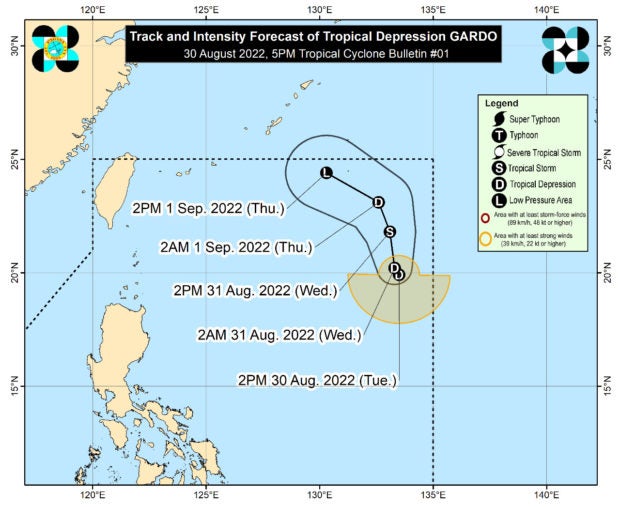 According to the state weather service, Gardo is not seen to impact the country directly but Aurora, CALABARZON, and Camarines Norte may anticipate overcast skies with scattered rain showers, thunder, and lightning from Tuesday afternoon until evening due to the tropical depression’s trough or the low pressure extending from its center.

(It is the extension of clouds or the trough of Tropical Depression Gardo that will bring scattered rains over Aurora, CALABARZON, and Camarines Norte. In the areas I have mentioned, expect cloudy skies with scattered rain showers, thunder, and lightning from Tuesday afternoon until evening.)

Pagasa advised residents and local government units to prepare for the possible adverse effects of Gardo and Hinnamnor and warned areas affected by the rain of possible flash floods and landslides.

Meanwhile, Metro Manila and the rest of the country may expect partly cloudy to cloudy skies with isolated rain showers due to localized thunderstorms, Pagasa noted.