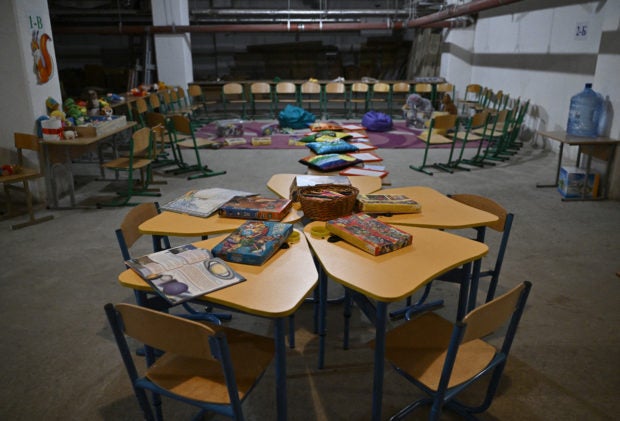 Toys and books are displayed inside a bomb shelter prepared for schoolchildren in a public school in Kyiv, amid the Russian invasion of Ukraine, on August 29, 2022. AFP

KYIV — Five meters beneath a Kyiv classroom, headmaster Mykhaylo Aliokhin puts the finishing touches on the bunker where his students will spend much of their time once Ukraine’s school term starts later this week.

The study hall above is still littered with school bags abandoned since February 23 — the last day before Russia invaded and school bells fell silent, replaced by the skirl of the air raid siren.

Down here, there are no windows. Desks, display boards, colorful books and globes all remain upstairs. This was once a changing room, but as shelling remains a threat in the capital it now serves as a shelter.

“As soon as a siren goes off, staff will immediately bring the children down to the basement regardless of the activity at the time,” Aliokhin told AFP. “As much as possible, they’ll carry on with their work in a relaxed way.”

Despite the austere conditions he hopes one third of his 460 pupils, aged between six and 16, will return when schools reopen on Thursday for the first time since the war started.

There are 4.2 million schoolchildren in Ukraine, according to 2021 figures.

Following Russia’s invasion more than two million children left the country, while another three million were displaced internally between February and June, according to the UN children’s agency Unicef.

Nonetheless in Kyiv — now distant from front line fighting raging to the east and south — 132,000 pupils are preparing to return to school on September 1, according to mayor Vitali Klitschko.

On Kyiv’s left bank, at Aliokhin’s private school, which AFP has chosen not to identify, staff have prepared two scenarios ahead of the first day back.

One will be a normal “overground” programme of learning, 10 meters (33 feet) from the shelter entrance.

The other curriculum will take place underground in case the air raid siren sounds, as it does most days.

“It’s not out of the realm of possibility that our enemy, who is very fond of symbolic dates, would take advantage of this one,” said 26-year-old Aliokhin.

Regardless of whether or not there are missiles, teachers will stage a party downstairs “to show the children that this is a safe place where they will certainly spend a lot of time this year”.

The bunker will be stocked with enough food and water for 48 hours. Medical staff and psychologists will be available at all times.

“I could never have imagined this, but here we are… in this new reality,” said Aliokhin.

‘Live in the present moment’

Nationwide, half of the 23,000 schools surveyed by Ukraine’s education ministry — about 51 percent — are equipped with the bunker facilities necessary to begin classes offline. Those without will teach classes online.

The sobering setting does not seem to be dampening enthusiasm for the new school year.

“I live next to my school,” said 16-year-old Polina, enjoying time with friends at a Kyiv cafe the week before school restarts.

“I will be safer there, because we will be brought down to the shelter in an organised way.

“To tell the truth, we just want to live our life fully after two years of Covid and six months of war,” she added.

“We are not afraid, we have already lived enough. Our generation has decided to live in the present moment.”

The choice may be more difficult for parents. According to Ukraine’s education ombudsman Sergiy Gorbachov, most parents reject face-to-face education because they fear the risks.

The education ministry says 2,135 schools have been damaged in the war.

Nevertheless Youlia Shatravenko-Sokolovych — who AFP met in Kyiv — has decided her seven-year-old daughter Myroslava will be back in the classroom on Thursday.

“Of course we are all scared, but I cannot deprive my child of socialisation,” she said. “I trust the Ukrainian army, which defends us.

“The fact that we are back to more or less normal life gives me hope.”

Preparing for the worst near Ukraine’s precarious nuclear plant