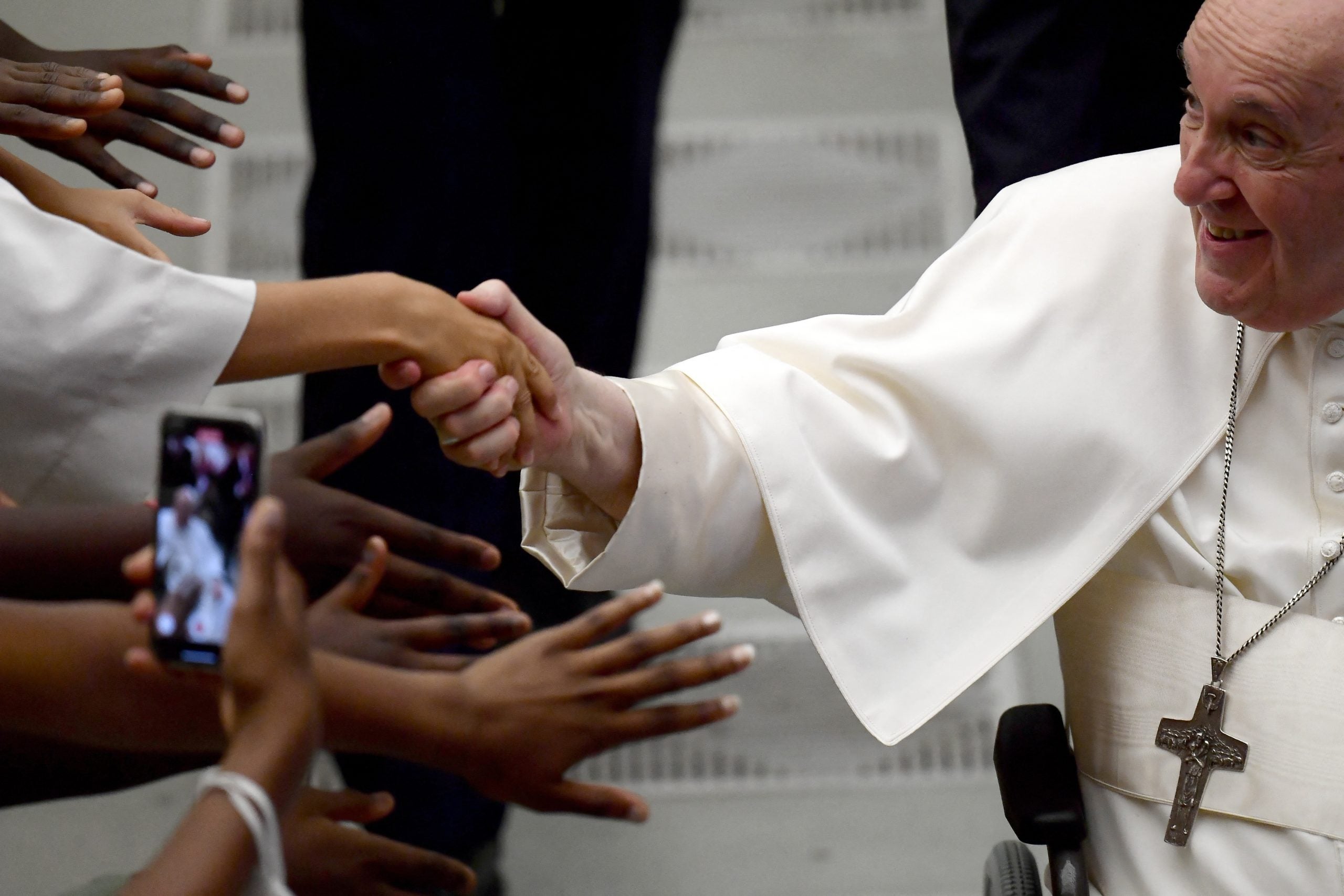 Pope Francis shakes hands with attendees as he attends an audience with altar servers from France in Paul VI Hall at The Vatican on August 26, 2022. (Photo by FILIPPO MONTEFORTE / AFP)

VATICAN CITY — Pope Francis will on Saturday create 20 new cardinals picked from the four corners of the world, most of whom could one day end up choosing the pontiff’s successor.

Francis has raised the possibility of retiring due to his declining health, a path taken by his predecessor Benedict XVI. If he were to do so, a conclave involving all cardinals aged under 80 would be called to pick a successor.

READ: Tagle one of cardinals eyed to become next pope, says report

Sixteen of the 20 cardinals created Saturday would be eligible for that conclave based on their ages.

The ceremony at St. Peter’s Basilica is the 85-year-old pope’s eighth since being elected in 2013 and includes clergy known for their pastoral work and, in some cases, progressive views.

All parts of the globe are represented, including new cardinals from Brazil and Nigeria, Singapore and East Timor, among others.

After this weekend, Francis will have chosen 83 out of the 132 cardinals currently qualified to elect a new pope.

That is nearly two-thirds of the total and precisely the percentage needed for any proposed name to pass.

In recent months, the pope has been forced to rely on a wheelchair due to knee pain, which he has said is inoperable.

He also suffers from sciatica, a chronic nerve condition that causes pain in his hip.

The new cardinals are always scrutinized by Vatican observers for clues as to the future direction of the Church and its 1.3 billion faithful.

Experts caution, however, that cardinals named by one pope do not necessarily choose successors in their likeness.

The Argentine pontiff has this year completed a major shake-up of the Vatican’s powerful governing body, the Roman Curia, which makes winning new converts a priority.

In keeping with his focus on making the Church more inclusive, transparent and responsive to the needs of the poor and marginalized, Francis has chosen two Africans and five Asians, including two cardinals who hail from India.

Vatican expert Bernard Lecomte told AFP the pope’s choices are “representative of the Church today, with a large spot for the southern hemisphere”, where 80 percent of the world’s Catholics live.

Virgilio Do Carmo Da Silva, the archbishop of Dili, will on Saturday become the first cardinal of tiny East Timor, an overwhelmingly Catholic nation in Southeast Asia.

The pope has also felt free to bypass the archbishops of major cities to choose those from less powerful seats, such as Robert McElroy, the 68-year-old bishop of San Diego, California.

McElroy has supported gay Catholics and criticized moves to deny Communion to US politicians — like President Joe Biden — who support abortion.

The pope will also create the youngest cardinal in the world, 48-year-old Italian missionary Giorgio Marengo, who works in Mongolia.

The 80-year-old bishop emeritus of Ghent, Lucas Van Looy, had been nominated but asked to be exempted following criticism of his handling of child sexual abuse by priests in Belgium.

Saturday’s ceremony at the Vatican will be followed by the traditional “courtesy visit,” in which the general public is invited to greet the new cardinals.