Tagle one of cardinals eyed to become next pope, says report | Inquirer News

Tagle one of cardinals eyed to become next pope, says report 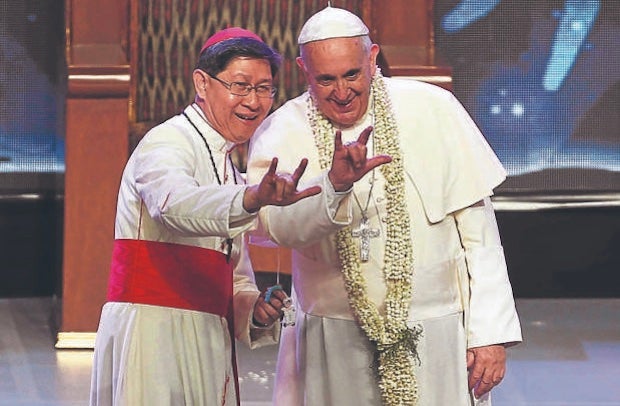 Cardinal Luis Antonio Tagle with Pope Francis during the pontiff’s visit to the Philippines in 2015. Tagle was then still the archbishop of Manila. (File photo by EDWIN BACASMAS / Philippine Daily Inquirer)

MANILA, Philippines — Cardinal Luis Antonio Tagle, a former archbishop of Manila, is one of two leading choices to be the next pope, according to a Catholic Herald report that was posted on its website on Aug. 5.

The other one is Hungarian Cardinal Péter Erdő, the archbishop of Esztergom-Budapest.

The report came out amid speculations that Pope Francis, who has lately had difficulty walking due to a strained knee, was nearing retirement.

Pope Francis recently appointed Tagle as one of 22 members of Vatican City’s Congregation for Divine Worship and the Discipline of Sacraments, which is headed by Cardinal-designate Arthur Roche.

In 2019, Tagle was appointed as the prefect of the Vatican’s Congregation for the Evangelization of Peoples. That put him closer to the pope, according to Henrietta de Villa, a former Philippine ambassador to the Vatican.

According to the Catholic Herald, whoever becomes the pope will greatly shape the Vatican’s future direction — Tagle representing the more liberal route, while Erdő poised to lead it to a more conservative path.

Aging Pope Francis admits he must slow down, or quit

Read Next
‘Pure political harassment and persecution,’ says Bello of his arrest
EDITORS' PICK
Percy Lapid’s kin: ‘We demand that his cowardly assassins be brought to justice’
Nothing’s certain so here’s how everyday Filipinos can make the most out of their Plan B
Do all the things you do, faster
PNP vows to bring justice for slain Percy Lapid; says probe underway
House energy committee chair Arroyo bats for cheap electricity
‘Seniority’ requirement despite vacant posts in DOH bothers senators
MOST READ
Student stabs teacher dead in Samar town
Trixie Angeles quits as press secretary due to health reasons
Not rehired?: Trixie Angeles not on list of reappointed Cabinet execs
Final net satisfaction rating slightly decreases for Robredo, Sotto — SWS
Don't miss out on the latest news and information.