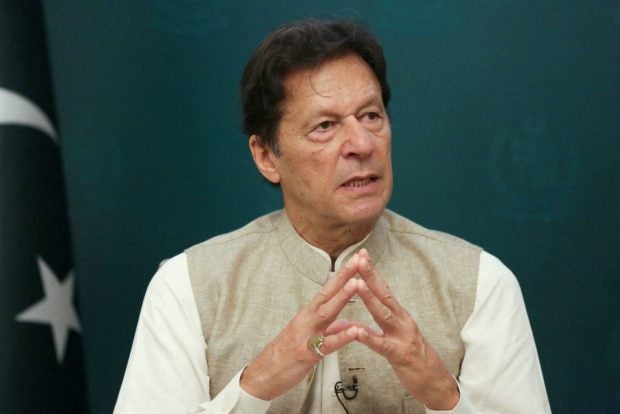 Khan’s court appearance is the latest twist in months of political wrangling that began when he was ousted by a vote of no confidence in the national assembly in April.

But the former cricket star retains widespread support, staging mass rallies railing against the establishment and Prime Minister Shehbaz Sharif’s government, which he says was imposed on Pakistan by a “conspiracy” involving the United States.

A court judgment was not immediately available, but Fawad Chaudhry — a former information minister and senior party official — said Khan had been granted “interim bail” until September 1.

“We are not satisfied with this decision. Instead the court should have quashed the case,” he said

The political crisis comes as officials struggle to deal with record monsoon rains that have flooded a vast swath of the country.

Figures from the national disaster agency showed Thursday that 903 people had died in the floods since June, and over 180,000 were forced to flee their rural homes.

The economy is also in free fall, with the country at risk of defaulting on foreign loans unless, as expected, the International Monetary Fund approves the resumption of a $6 billion bailout package next week.

Khan and other senior officials of his Pakistan Tehreek-e-Insaf party (PTI) have faced a raft of charges since losing power.

The country has a history of those in power using the police and courts to stifle their political opponents, and premier Sharif has several pending cases brought against him while in opposition.

The latest charges against Khan stem from comments he made at a weekend rally when he criticised a magistrate responsible for keeping a PTI official in police custody, after party leaders said he was tortured.

Khan’s main goal is an early general election — the next one must be held before October next year — but the government has shown no sign of wanting to go to the polls.

Khan swept into power in 2018 thanks to an electorate weary of the dynastic politics of the country’s two major parties, promising to sweep away decades of entrenched corruption and cronyism.

But under his rule the country’s economy went backwards, and the IMF suspended the loan programme that the new government has only just gotten back on track.

Khan also lost the support of the military.

“His provocative statements against state institutions and officers… is likely to disturb public peace and tranquillity,” the Pakistan Electronic Media Regulatory Authority said.