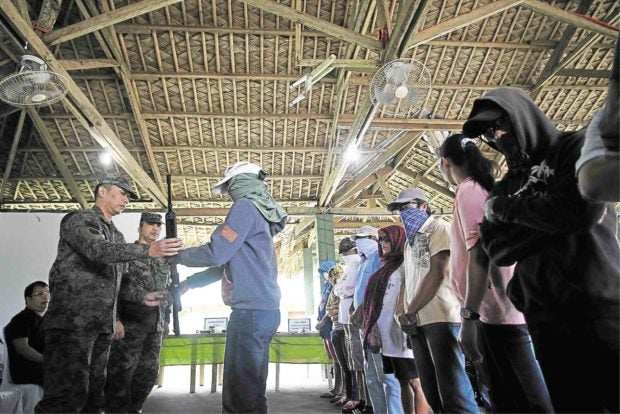 File Photo: In Albay province, members of the New People’s Army surrender and turn over their guns to military officials in Daraga town. —MARK ALVIC ESPLANA

The Quezon police, in a report on Tuesday, identified the rebel returnees as Susan Dela Cruz, 49, and her two sons, Sonny, 21, and Eric, 22.

The former rebels had no firearms when they came to the police station in General Nakar town on Monday night.

“They used to operate in the Sierra Madre up to Bulacan,” he said in a phone interview Tuesday.

The police said Eric was the first communist guerrilla in the family.

“He recruited his mother and brother upon the order of his NPA commander,” Aumentado said.

The rebel returnees will be given assistance under the Enhanced Comprehensive Local Integration Program (E-Clip).

The NPA is the armed wing of the Communist Party of the Philippines.