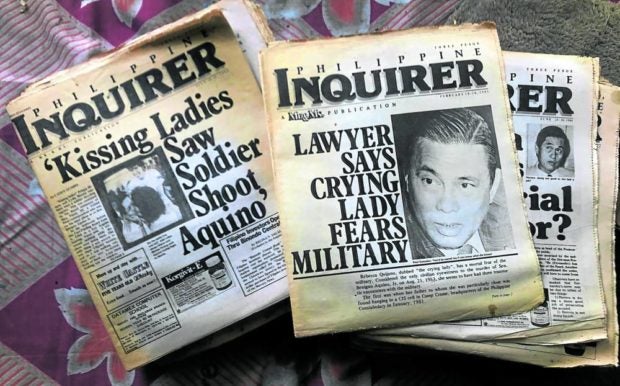 WORTH DYING FOR | With another Marcos in power, activists and rights advocates, mostly in their senior years, feel compelled to preserve the memory of Benigno “Ninoy” Aquino Jr. as a martyr in the face of historical distortions targeting the youth. On the 39th year since his assassination, groups showcase films, artworks and memorabilia in honor of the late senator, such as old newspapers published then by the “mosquito press.” (INQUIRER FILE PHOTO)

MANILA, Philippines — There’s a reason why today’s event at Bantayog ng mga Bayani in Quezon City will kick off at 1 p.m.

That’s the time, exactly 39 years ago, when former Sen. Benigno “Ninoy” Aquino Jr. was assassinated at what was then the Manila International Airport, his death marking what is now considered the beginning of the end of the Marcos regime. Aug. 21, 1983, was also a Sunday.

Project Gunita, one of the groups organizing the commemoration, will start the Bantayog program with the screening of the raw footage of the opposition leader’s final moments as he was escorted by a military team out of his plane, one that recorded the chilling, off-camera instructions of someone repeatedly saying “Pusila! Pusila!,” the Visayan word for “kill” and the signal for the Aquino murder to proceed.

The screening will be followed by the opening of an exhibit of old publications about the assassination and the tumultous political period that followed, materials painstakingly collated by the museum through the post-Edsa years and now being digitized by Project Gunita for a more secure preservation.

Preservation. That’s easily the day’s key word — for underscoring the occasion is a growing sense among those attending that the memory of Ninoy’s martyrdom is not only fading but, worse, being distorted by the current wave of historical revisionism that targets the minds of the younger generation.

Among those marking this year’s Ninoy Aquino Day — the first under the presidency of Ferdinand Marcos Jr. — are former activists who experienced martial law during Ferdinand Sr.’s dictatorship.

“A lot of us were really hurt when Marcos Jr. won the presidency,” said Malu Maniquis, now a documentary filmmaker. “That’s when we realized a fatal mistake: many of us became complacent after the ouster [of the Marcoses in 1986].”

“We have already gotten older and many of us have already passed on, but the unscrupulousness and brazenness of those in government continue,” said fellow activist Edith Reyes. “Thank God for the youth who continue to believe in the work that we ‘super seniors’ still do.”

Reyes and Maniquis are thus counting on Project Gunita, which is putting together a “history fair” at Bantayog in partnership with “senior’’ groups like Bantayog ng mga Bayani Foundation, Campaign Against the Return of the Marcoses and Martial Law, People Power Volunteers for Reform and the August Twenty-One Movement.

Among the speakers expected in the afternoon program are former political prisoners, human rights advocates and resource persons on the investigation conducted on the Aquino killing when the Marcoses were still in power.

Aside from film screenings, the fair will feature art and photo exhibits on martial law and the Marcos wealth, including materials from the National Historical Commission of the Philippines.

The Human Rights Violations Victims Memorial Commission, a body created by law in 2013, will present a scale model of the planned Martial Law Museum to be built on the University of the Philippines Diliman campus.

Meanwhile, in Dagupan City, the Ninoy & Cory Foundation (NCAF) will host a commemorative mass at the Metropolis Cathedral at 4 p.m., to be officiated by Archbishop Socrates Villegas.

The Aquino Center and Museum in Tarlac City will be open to visitors for free and will raffle off commemorative items throughout the day.

Online, the multiawarded documentary “The Last Journey of Ninoy” can be viewed on the NCAF YouTube page.