As US lawmakers visit PH, Romualdez said ties between two countries getting stronger 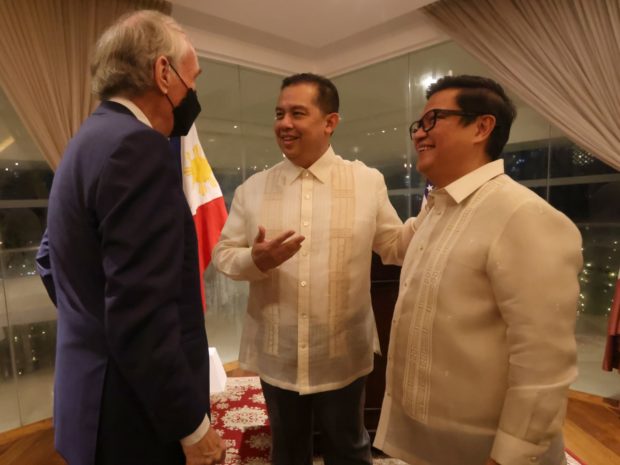 Members of US and Philippine delegations discuss matters related to the two countries during the US-Philippines Congressional Delegation Friendship Caucus held at the Manila Golf and Country Club on Thursday night. (Photos from Office of Speaker Martin Romualdez)

MANILA, Philippines — The decades-long relationship between the Philippines and the United States (US) is only getting stronger under the current administration, House of Representatives Speaker and Leyte 1st District Rep. Ferdinand Martin Romualdez said as US lawmakers visited them.

Romualdez said during the meeting with the US delegation at the Manila Golf and Country Club on Thursday that the ties between the two countries continue to be more robust under President Ferdinand “Bongbong” Marcos Jr.’s term, despite the crises that have been going on all over the world.

“The relationship is getting stronger despite all the crises that we faced in the international arena. I know this relationship will endure and help us here stay the course, moving forward, peace, prosperity, and progress, not just in the Philippines, but in the region and of course with our partner, the United States,” Romualdez told the delegation during the US-Philippines Congressional Delegation Friendship Caucus, transcripts of which were released on Friday.

“Thank you for coming tonight, for allowing me to host you and meet you and engage you one-on-one, to assure you that the flame that burns in our hearts that had started a long, long time ago between the Filipino-American People will continue,” he added.

Romualdez said that the US lawmakers’ presence is very important, as aside from being able to discuss engagements of the two countries, the meeting presents the Filipino lawmakers a chance to thank their American counterparts, especially for helping the Philippines throughout the years.

“We extend our deep appreciation to your delegation for giving us this opportunity to fortify our engagements with the US Congress on matters beneficial to the Philippines and the United States,” the House Speaker said.

“Indeed, your presence here means a lot to us. It is an opportunity for us to further deepen and strengthen our ties of friendship and manifest our deep appreciation for the strong support and for all the assistance during our crises after Typhoon Haiyan in my district,” he added, referring to Super Typhoon Yolanda in 2013 which wreaked havoc over Eastern Visayas, particularly Tacloban in Leyte province. 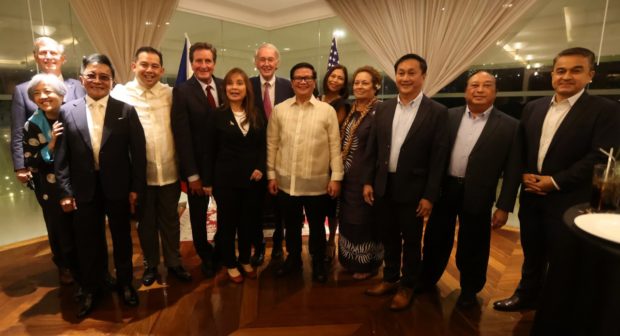 Members of US and Philippine delegations discuss matters related to the two countries during the US-Philippines Congressional Delegation Friendship Caucus held at the Manila Golf and Country Club on Thursday night. (Photos from Office of Speaker Martin Romualdez)

During the meet, Romualdez was accompanied by other House and Senate leaders, namely:

Romualdez said he is confident that the visit of the US lawmakers would only improve already strong ties.

“Our people split their blood here in the hills of Bataan, and that soil fertilized that relationship, that blood of US and American soldiers. These are the ties and binds that go deep and very well rooted in our conscience,” he said.

“I’d like to say thank you again, and welcome to the Philippines, and we wish you come and visit us more often, thank you,” he added.

The US and Filipino legislators’ Friendship Caucus is a meeting where US-Philippine cooperation on political, economic, and security issues, as well as domestic needs and concerns of Filipino Americans on the stateside, are discussed.

The US lawmakers are in the country for a series of meetings, including one with President Marcos Jr.  They also tried to visit detained former senator Leila de Lima, but they were barred by the Philippine National Police (PNP) for lack of authority from the courts.

No De Lima visit, but US lawmakers got to see Marcos