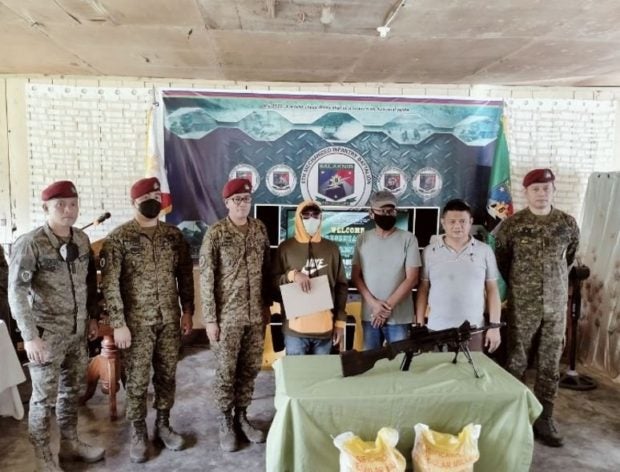 TIRED. A bomb-maker of the outlawed Bangsamoro Islamic Freedom Fighters, identified only as “Alias Rosbil,” (center) surrendered to the military with his Ultimax light machine gun. (Army photo)

COTABATO CITY—Saying he was tired of fighting a lost cause, a bomb maker of the Bangsamoro Islamic Freedom Fighters (BIFF) surrendered Friday and turned in his machine gun to military authorities in Maguindanao.

The Army withheld the bomb maker’s identity to spare him from possible retaliation from his former comrades in the BIFF.

Mampon said the local government would provide financial assistance to Rosbil in support of the military’s Balik Baril program.

Dela Cruz said Rosbil would undergo documentation, so he could be cleared and enrolled in the government’s integration program.

In a statement, Lieutenant General Alfredo Rosario, Jr., Western Mindanao Command chief, attributed the success of the military’s anti-terrorism campaign to the support of local governments and civil society.