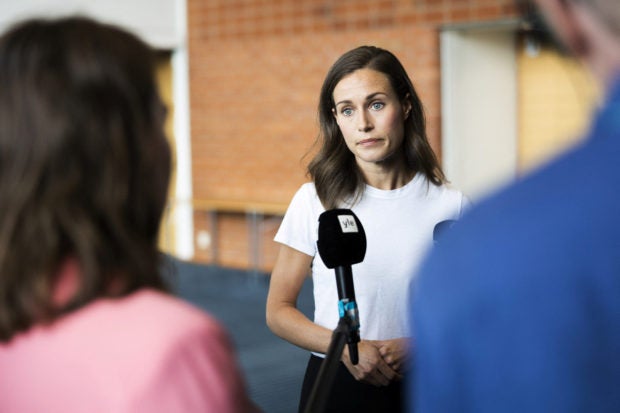 HELSINKI — Finland’s Prime Minister Sanna Marin on Thursday said she was upset that videos of her dancing at private parties were published online as they were meant to be seen only by friends.

Marin, 36, spoke after a two-minute video of her singing and dancing with well-known local influencers and artists spread on social media and in Finnish media on Wednesday.

The clips were originally posted to a private Instagram account. Marin, who became the world’s youngest serving government leader in December 2019, said she knew she was being filmed but never thought the videos would become publicly available.

“These videos are private and filmed in a private space. I resent that these became known to the public,” Marin told reporters. She said she did not know who leaked them.

Many Finns have voiced support for the young leader for combining a private life with her high-profile career. But newspaper Helsingin Sanomat said the episode raised questions about her judgment.

“Marin may have acted in good faith, but this gullible she should not be,” the paper wrote in an editorial.

“The prime minister can, in a sensitive situation, put the weapons of information warfare in the hands of those who would like to hurt Finland,” the newspaper said.

Marin said the video was a compilation of clips from two separate occasions a few weeks ago. She said people at the events consumed alcohol but no one took drugs to her knowledge.

“We just partied, also in a boisterous way. I danced and sang,” Marin said, denying a claim that the videos had been a publicity stunt less than a year until the next general election.

Marin in January told Reuters she and her fellow young female ministers have been targeted with extensive hate speech for their gender and appearance while in office.