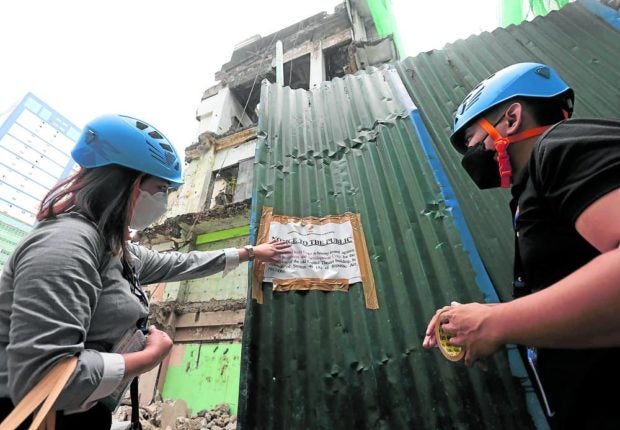 CEASE AND DESIST The developer, Ascott Resources and Development Corp., must stop demolition works at the old Capitol Theater until steps are taken to preserve the building’s tower and facade, as stated in its agreement with the National Commission for Culture and the Arts. —MARIANNE BERMUDEZ

The National Commission for Culture and the Arts (NCCA) is racing to save the old Capitol Theater on Manila’s historic Escolta Street after the building’s facade, which was supposed to be left untouched under a deal with property developers, sustained damage during the ongoing demolition.

The commission on Thursday issued a cease-and-desist order on the demolition of the prewar art deco structure after taking note of the condition of the “tower relic,” particularly the front part.

In an August 16 letter addressed to the developer, Ascott Resources and Development Corp. (ARDC), the NCCA chair, Rene Escalante, said photos forwarded to him “already show considerable damage done to the tower due to the demolition.”

Designed by the late National Artist for Architecture Juan Nakpil, Capitol Theater was built in the 1930s along Escolta, then the primary commercial district in the capital. The tower relic is noted for the bas-relief sculpture depicting two muses, made by sculptor Severino Fabie.

In 2017, ARDC received the go-signal from the NCCA, the National Historical Commission of the Philippines (NHCP) and the National Museum (NM) to demolish the Capitol Theater to pave the way for the construction of a high-rise residential building.

Under the tripartite agreement between the NCCA, NHCP and NM, much of the building was to be torn down, but with instructions to ARDC to preserve the building’s facade. ARDC is to “undertake a perfect replication of the existing facade” while retaining the tower relic, according to the deal.

READ: Nakpil’s Capitol Theater on Escolta to be demolished

In its order stopping the demolition, the NCCA cited its letter dated July 9, 2019, advising the real estate company to revisit its architectural and structural design to adapt the proposed development to the structure.

“Considering that no development plan or new methodology has been submitted to and approved by the NCCA, the ongoing demolition of the old Capitol Theater Building is therefore done in violation of Section 48(a) of Republic Act No. 10066,” the commission said, referring to the National Cultural Heritage Act of 2009.

Stephen Morada, a heritage advocate and former NCCA employee, was the first to notify the commission of the damage.

“Last week when I observed that a part of the building which was supposed to remain untouched was being crushed, I sent a picture to the NCCA staff immediately,” Morada told the Inquirer, saying he did it as a concerned citizen. 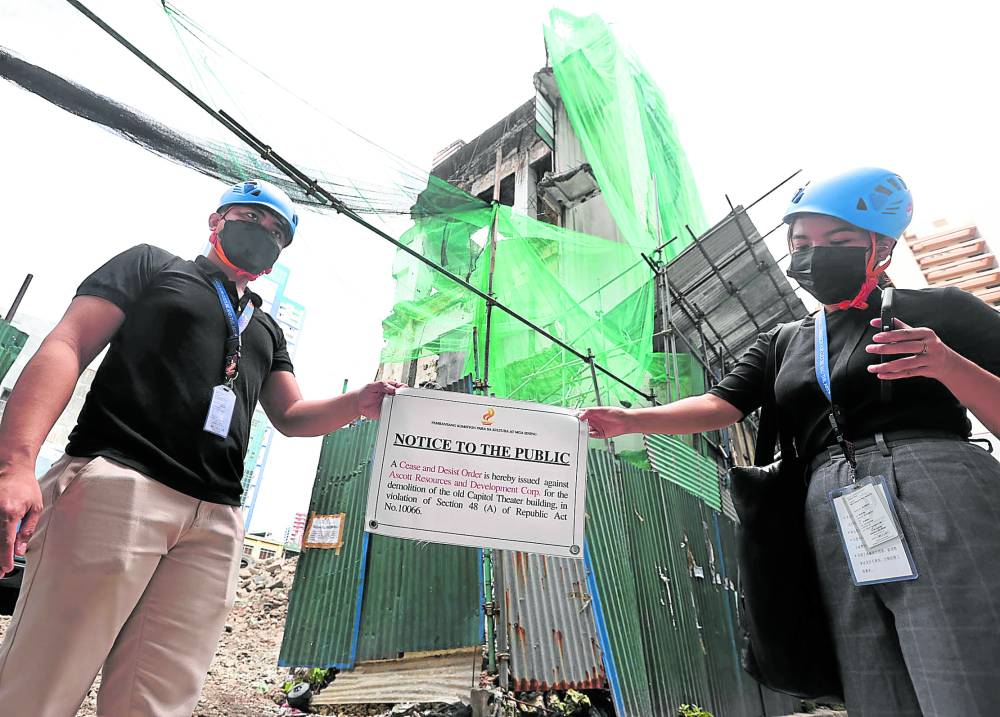 LEAVE SOME OF IT The National Commission for Culture and the Arts is forced to act quickly on Thursday to save the most valued parts of the prewar Capitol Theater in Manila, after noting “considerable damage’’ to the facade. A developer has been given the go-signal to build a high-rise residential project at the site, but on the condition that it retain the old facade and tower.

Rush to the worksite

The cease-and-desist order was originally set to be issued at 2 p.m. on Thursday but Morada said the NCCA chair realized the need to act quickly to prevent further damage to the structure.

An NCCA team was therefore dispatched to the worksite at 11 a.m., or three hours earlier.

“We were able to meet the workers and the foreman and they cited safety concerns to explain why the tower relic was being crushed. They said there were hollow blocks above that could easily fall off so they decided to demolish it,” he said.

But the NCCA team insisted that it was still a violation of the terms of agreement, saying the demolition must stop until the developer took proper action.

“Some people would say that it’s too late an action for the NCCA to still serve the order at this point. But for me it’s better late than ever,” Morada said.

According to Morada, the incident also reflects the lack of government resources and workforce to monitor the preservation of heritage structures.

“That’s what hurts because every bit and piece (of the structure) is symbolically our history that they were destroying,” he said, adding: “It’s like even the work of a national artist that is supposed to be symbolic of our cultural heritage is not being given the importance.”

Morada said he was keeping a close eye also on the El Hogar Filipino heritage building, located at the corner of Juan Luna Street, and Muelle dela Industria in Binondo, in case something similar were to happen to those sites.

The Capitol Theater was completed in 1935 at a time when Escolta Street in the Binondo district was a booming center for business and entertainment.

The 800-seat theater was known for its curving staircase and was considered a first-class movie house place where Filipinos got their first taste of local and foreign films as well as live performances.

A number of historic buildings in Manila have suffered a similar fate of being torn down over the last two decades, including the Admiral Hotel, the old Philippine National Bank building and the Philippine Su Kuang Institute building.

In 2000, another art deco landmark, the Jai-Alai Building on Taft Avenue, was demolished amid strong objections from heritage conservationists. —WITH A REPORT FROM INQUIRER RESEARCH