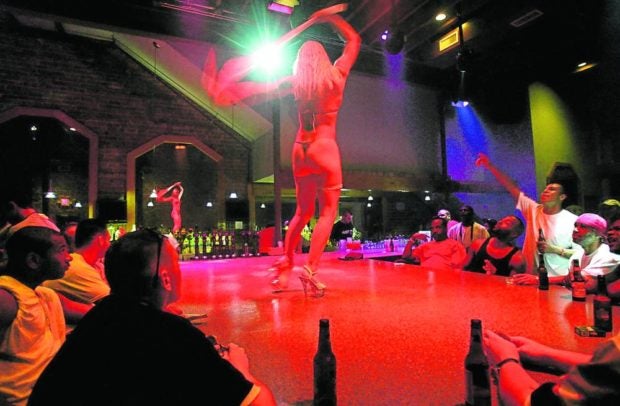 JUST LIKE ANY LABOR SECTOR In this September 2005 file photo, a stripper performs at the Deja Vu Showgirls Club on Bourbon Street in the French Quarter of New Orleans. —AFP

Dancers at the Star Garden Topless Dive Bar submitted a petition with the federal government, beginning a process that could see them represented by performers union Actors’ Equity, in what officials described as a first.

“We like what we do,” said Velveeta, a Star Garden dancer. “We would like our jobs even more if we had basic worker protections.”

Equity already represents over 51,000 performers and stage managers across the United States, many of them in and around Los Angeles.

“Strippers are live entertainers, and while some aspects of their job are unique, they have much in common with other Equity members who dance for a living,” said Actors’ Equity Association president Kate Shindle.

“These dancers reported consistent compensation issues – including significant wage theft – along with health and safety risks and violations.

“They want health insurance and other benefits, like workers’ compensation. They need protection from sexual harassment, discrimination and unjust terminations.”

The petition was filed with the National Labor Relations Board, who will now need to schedule a vote for the 30 or so eligible strippers.

If a majority votes to unionize, Equity will begin negotiating a new contract with Star Garden on their behalf.

In the meantime, the exotic dancers say they will picket the club in the North Hollywood area of the city, with what Equity called “a public information campaign to engage Star Garden’s patrons.”

The campaign is being supported by Strippers United, a nonprofit group advocating for dancers’ rights.

No one at Star Garden, which has an average four stars on Yelp, picked up the phone when Agence France-Presse (AFP) called on Wednesday.

While Equity has never had stripper members before, this is not the first time ecdysiasts have organized in the United States.

Wednesday’s move comes amid an uptick in interest among workers across the United States in unionization, with staff at several branches of Starbucks among the most high profile.

Through the first three quarters of fiscal year 2022 – from October 1 to June 30 – there were 1,935 unionization campaigns filed with the National Labor Relations Board, up 56 percent from the prior year.