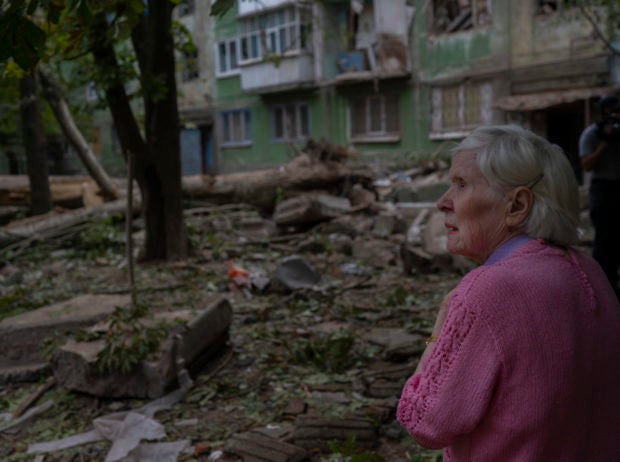 A local resident looks at the damages after an early morning Russian forces’ strike in Kostiantynivka, eastern Ukraine, amid the Russian invasion of Ukraine. AFP

Nato chief Jens Stoltenberg says it is “urgent” that the International Atomic Energy Agency be allowed to inspect the Zaporizhzhia nuclear power plant in Ukraine that is under Russian military control.

Speaking of the danger of “a nuclear accident or incident”, he tells reporters in Brussels that Moscow’s military control of the facility “endangers the population of Ukraine, of neighbouring countries and of the international community”.

The plant is the largest one in Europe, and the uncertainty surrounding it as the war rages has fuelled fears of a nuclear accident to rival that of Chernobyl in 1986, when a reactor exploded.

Russia and Ukraine have accused each other of shelling the installation.

The situation at the plant is expected to be on the agenda when UN chief Antonio Guterres holds talks on Thursday in the western Ukrainian city of Lviv with President Volodymyr Zelensky and Turkish counterpart Recep Tayyip Erdogan.

The three will discuss “the need for a political solution to this conflict”, UN spokesman Stephane Dujarric says.

Ukraine and Russia, two of the world’s biggest grain exporters, agreed a deal brokered by the UN and Turkey last month to unblock Black Sea grain deliveries after Russia’s invasion.

Crimea bridge should be ‘dismantled’

Ukrainian presidential aide Mykhaylo Podolyak calls for Moscow’s main bridge connecting the Kremlin-controlled Crimea to the Russian mainland to be “dismantled,” in the wake of several attacks on the peninsula.

The 19-kilometer (12-mile) bridge inaugurated in 2018 by Russian President Vladimir Putin is Moscow’s key military and civilian land corridor to the peninsula, which it annexed from Ukraine in 2014.

It “must therefore be dismantled. Not important how — voluntary or not”, Podolyak says on social media, implying the Kerch bridge could become a military target for Ukrainian forces.

Russian military installations on the peninsula have been rocked recently by explosions, with the Russian defence ministry blaming an attack this week on an act of “sabotage”.

Ukraine has not publicly claimed responsibility for attacks leading to the explosions, but political and military officials have made quips about the incidents online and implied that Ukrainian forces were involved.

Some Russians happy to holiday in sunny Crimea despite blasts