Some Russians happy to holiday in sunny Crimea despite blasts 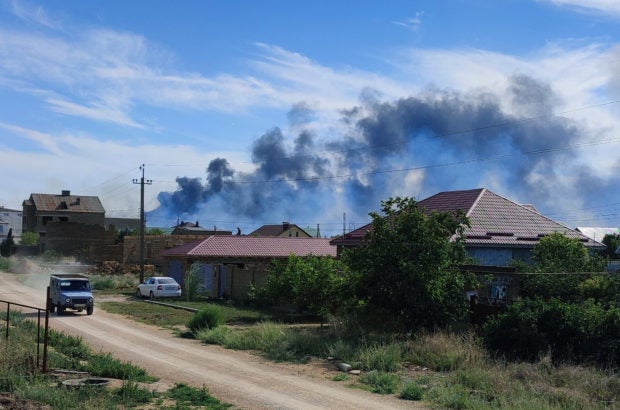 Smoke rises after explosions were heard from the direction of a Russian military airbase near Novofedorivka, Crimea August 9, 2022. REUTERS FILE PHOTO

(This content was produced in Russia, where the law restricts coverage of Russian military operations in Ukraine)

Russian tourists took advantage of the heat and sun on Wednesday to enjoy a summer vacation in Crimea, saying they were not worried by blasts that rocked military bases earlier in the week.

Crimea, annexed by Russia in 2014, has always been an important destination for holidaymakers.

Russia on Tuesday blamed saboteurs for orchestrating a series of explosions at an ammunition depot in Crimea. Last week blasts ripped through an air base, which Moscow at the time said was caused by an accident.

Tourists interviewed in the beach city of Sevastopol and the main train station in the Crimean capital Simferopol said they were focused on having a good time.

“Regardless of explosions and other diversions we are not changing our holiday plans. We are going to stay here, with pleasure … and relax in this wonderful sun and wonderful sea,” said Yury Znamenskiy, a singer.

Adults and children splashed in the water and lay on the beach. In the background a Russian warship could be seen while at one point a military helicopter flew low overhead.

Evgenia Romashova, from Zheleznogorsk in western Russia, said she had been worried about the blasts but decided to come anyway. “This is our favourite town,” she said.

In Simferopol, a steady stream of trains arrived with tourists from across Russia.

“Nothing ventured, nothing gained. We are not afraid,” said a smiling Rakhmat Gusman Babay from Kazan, Tatarstan, some 2,000 km (1,240 miles) to the northeast.