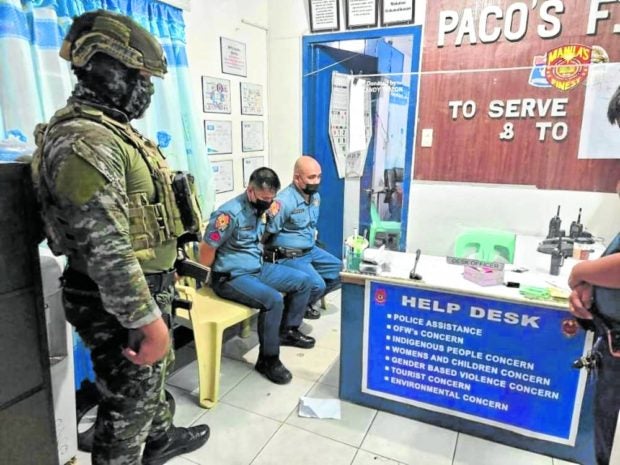 Azurin on Wednesday warned police commanders to discipline their personnel or they will be sacked from their posts.

“If you are not going to do your job, then the entire station or substation will be relieved and they will be replaced with more responsible and accountable PNP personnel,” he said.

On Tuesday, operatives of the Integrity Monitoring and Enforcement Group (Imeg) arrested Patrolman Jerome Arroyo in Taguig City as part of the PNP’s internal efforts against rogues in uniform.

Arroyo, who is assigned to the Manila Police District (MPD), was the subject of a warrant of arrest issued by Judge Anne Beatrice Balmaceda of the Manila Regional Trial Court Branch 27.

According to the PNP chief, it is standard procedure for the supervisor of arrested personnel to automatically order an investigation and prompt the PNP Internal Affairs Service (IAS) to file an administrative case against the arrested personnel, under the doctrine of command responsibility.

“Instilling discipline is a routinary action that must be taken priority so we can implant integrity in our work,” Azurin said.

The day before, Imeg agents arrested three personnel of the MPD for extortion activities.

Caught in the act inside their work station were Police Staff Sgt. Erwin Licuasen, 34; Cpl. Chimber Importa, 33; and Patrolman Leopoldo Tuazon, 39, all of the Paco precinct of MPD’s Ermita police station.

According to Imeg director Brig. Gen. Warren de Leon, the operation stemmed from a complaint of a tricycle operator who claimed his driver was arrested and his tricycle impounded on Aug. 14.

Azurin ordered the IAS to investigate the three police officers for administrative liability, which could lead to their dismissal from the police service.

The Imeg conducts intelligence buildup and law enforcement operations not only against active PNP personnel but also against dismissed and retired officers who are involved in any illegal activities such as drug trafficking, human trafficking, financial crimes, cybercrime, malversation, graft and corruption practices, and security violations.