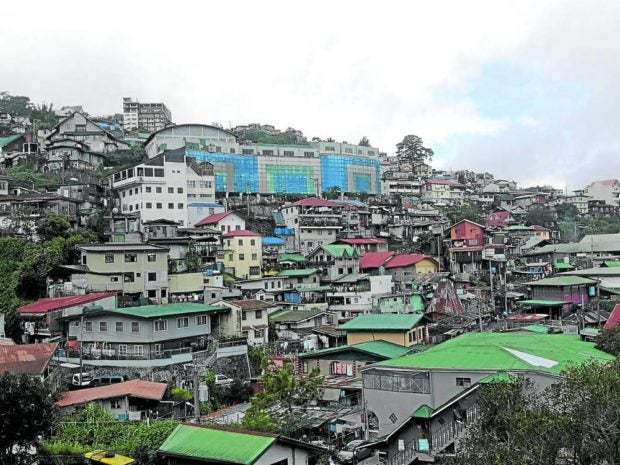 PRECIOUS SPACE | Due to a shortage of rooms in school-run dormitories, students enrolled in Baguio City universities and colleges, many of them from provinces in northern and central Luzon, are forced to stay in boarding houses and transient homes. Not all of these accommodation facilities have been issued permits by the city government. (Photo by EV ESPIRITU / Inquirer Northern Luzon)

BAGUIO CITY, Benguet, Philippines — False advertisements on social media for rooms and spaces in boarding and transient houses have been victimizing students who are returning to this city for the new school term after spending two years attending online classes because of restrictions due to the COVID-19 pandemic.

The police are looking into two complaints sent last week to the mayor’s office and the city council’s public information office.

On Aug. 8, a resident alerted Philip Puzon, executive assistant at the mayor’s office, that photographs of their family home were used to solicit down payments from students who were searching for accommodation in the city, according to Aileen Refuerzo, city information officer.

The family did not reveal how much money may have been taken, but they said they learned about the scam when students began turning up at their doorsteps.

Refuerzo said the family reported that one student showed up with the mother.

On Sunday, the owner of a boarding house complained to the city council that his establishment was also used to get money from students through the stolen identity of a woman who lost her wallet in 2016, said the council’s information officer, Jordan Habbiling, on Tuesday.

The woman’s identity was used to fabricate the fake boarding house’s registration with the Department of Trade and Industry, Habbiling said in a separate interview.

He said he could not post the alert immediately on Aug. 13 as they were waiting for the Bureau of Internal Revenue to confirm that the registration was false.

The fake boarding house used several online payment accounts with identities that needed to be verified by authorities, Habbiling said.

ENSURING SAFETY Boarding houses and dormitories are inspected by government and private engineers before these take in studentswho will return to Baguio City after two years of distance learning due to the pandemic. —PHOTOS BY EV ESPIRITU

It happened again when restrictions were eased and tourists flooded the summer capital this year.

Baguio is a university town, with 21 tertiary institutions catering to about 60,000 students at a given year, many of them from provinces in the Cordillera and northern Luzon, and even from Central Luzon and Metro Manila.

Among these are the state-run Philippine Military Academy and the University of the Philippines Baguio, which have designated student housing facilities.

The city government’s licensing office has not released the latest number of transient and student lodging facilities in Baguio, although estimates range between 200 and 400, including houses or apartment units used for student housing but have not been issued permits.

On Monday, the city government worked out a new traffic routing scheme in anticipation of a deluge of transient students, given the weekend gridlocks that already plague Baguio when tourists come.

With no space left, Baguio buys land in nearby towns