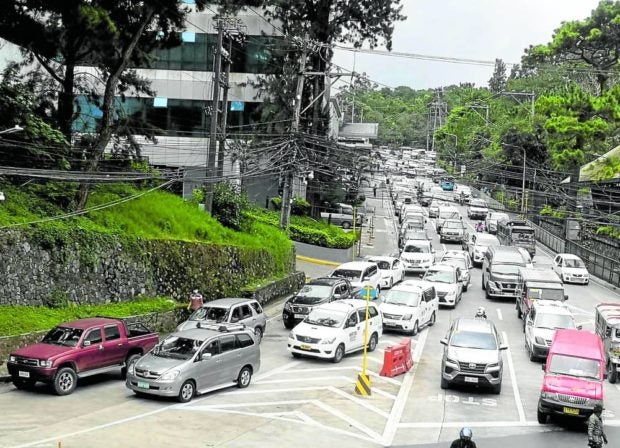 BIG CITY PROBLEMS Traffic jams, congestion, pollution and waste management are among the problems that Baguio City has to deal with due to overdevelopment. (Photo by EV ESPIRITU / Inquirer Northern Luzon)

BAGUIO CITY, Benguet, Philippines — High school student Aliya Mendoza was asked on Monday to work out how many Baguio cities would be needed for a resident to live comfortably in the summer capital.

She was told that 1.9 hectares per resident was the ideal “environmental footprint,” where each individual could consume and benefit from all resources and which could “absorb all the waste” that a person would generate.

She calculated that the population would require 122 Baguio cities for each resident to enjoy the best quality of life. Baguio was built to accommodate 25,000 people but is now populated by 366,358 people (2020 census).

Mendoza, who is enrolled at Baguio City National Science High School, joined a group of elementary and high school students who interacted with experts at an environmental summit on Monday. They were encouraged to think of solutions that would prevent Baguio’s descent into urban decay.

If nothing is done to “course-correct,” the city’s problems of overpopulation, deforestation and pollution would be irreversible by 2045, Mayor Benjamin Magalong told them.

Magalong said the city government intended to convert all Baguio villages into “livable communities,” or orderly and peaceful settlements that have clean and sustained potable water, unhampered access to food and services, and are able to breathe fresh air while strolling through green public spaces like parks.

He said residents of these communities should no longer be inconvenienced by perennial big city problems like traffic gridlock once an efficient and environmentally sound mass transport system takes over the city streets.

The mayor invited the children to express their views and to help generate discourse about urban decay because the government’s aim is to improve the city for their generation.

The city is opening an online portal or dashboard for young Baguio residents who wish to exchange ideas, secure answers to questions, and offer their suggestions, said City Planning and Development Officer Donna Tabangin.

Tabangin, an architect, was part of the research consultancy group Certeza Infosys, which was commissioned by the National Economic and Development Authority to measure Baguio’s urban carrying capacity.

In 2019, the group concluded that many resources like potable water, roads, forests, and development areas are no longer sufficient for Baguio’s current population, which grew to 700,000 whenever tourists, students, out-of-town workers, and businessmen come up to the city in the daytime.

But while the future seems grim, Tabangin says there is time to rebuild the carrying capacity of Baguio’s green cover, roads and other resources.

“We need creative solutions, and creativity and innovation will come from you,” she said.

The students were also introduced to Baguio’s “twin,” a digital 3-dimensional (3D) model of the city, which was designed and built by the American colonial government in the early 1900s.

The digital model provides insights, such as the impact of urban development on the remaining forests, the city’s potable water supply, and even traffic flow. It uses data collected about the city, such as fault lines and the terrain’s vulnerabilities to landslides, sinkholes, and floods.

The Baguio “twin” also identifies the actual settlers living in these danger zones.

“We built everywhere, even on steep slopes. People built on the limestone formation of the city, where there are sinkholes. Our urban audit discovered there are residences on top of sinkholes … There are even structures on top of fault lines,” Tabangin said.

Magalong lines up 50 projects to prevent urban decay in Baguio

Read Next
DSWD delists over 17,000 4Ps grantees in Central Visayas
EDITORS' PICK
Percy Lapid’s kin: ‘We demand that his cowardly assassins be brought to justice’
Nothing’s certain so here’s how everyday Filipinos can make the most out of their Plan B
Do all the things you do, faster
PNP vows to bring justice for slain Percy Lapid; says probe underway
House energy committee chair Arroyo bats for cheap electricity
‘Seniority’ requirement despite vacant posts in DOH bothers senators
MOST READ
Student stabs teacher dead in Samar town
Not rehired?: Trixie Cruz-Angeles not on list of reappointed Cabinet execs
Final net satisfaction rating slightly decreases for Robredo, Sotto — SWS
Heart Evangelista to stay abroad ‘indefinitely’: ‘Hindi muna ako babalik’
Don't miss out on the latest news and information.