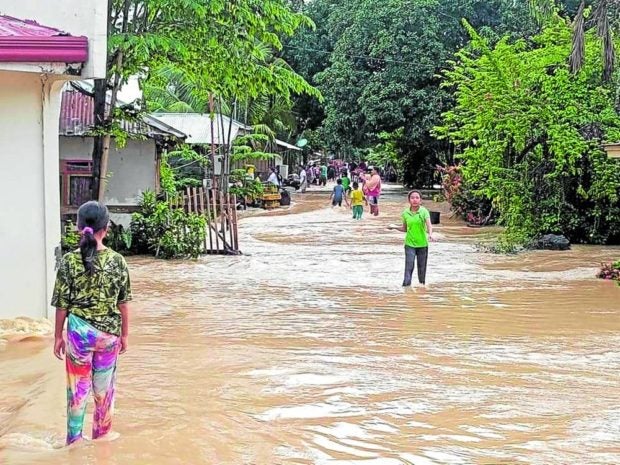 RAINY SEASON NIGHTMARE | Residents of Datu Montawal, Maguindanao, come out of their homes as floodwater rises due to heavy downpour this week in the nearby provinces of Cotabato and Bukidnon, causing rivers flowing through Maguindanao communities to swell. (Photo by DATU BOLELO MAMASABULOD / Contributor)

COTABATO CITY, Maguindanao, Philippines — A 6-year-old boy drowned in Pagalungan town as the banca (outrigger boat) carrying his family capsized on Tuesday, when they tried to escape rising floodwaters, a town official said.

The boy, Ali Mudin, was with his mother and a 12-year-old sister aboard the boat traversing the Rio Grande de Mindanao when the banca overturned, according to Pagalungan Mayor Salik Mamasabulod. His mother and sister were rescued, the mayor told the Inquirer.

Mudin’s family was only one of the 15,000 families who were displaced by floods in Pagalungan and Datu Montawal towns in Maguindanao, following continuous rain in the neighboring provinces of Bukidnon and Cotabato, causing rivers to swell and overflow.

Nash Alimanan, a resident of Barangay Poblacion in Pagalungan, said the water level at the municipal grounds rose up to the level of his chest, or about a meter from the ground. He said the water level might still continue to rise as rains continued to pour in Maguindanao and nearby provinces.

Floodwater also inundated all 11 barangays of Datu Montawal after the Kabacan River overflowed due to a heavy downpour in Bukidnon and Cotabato provinces. 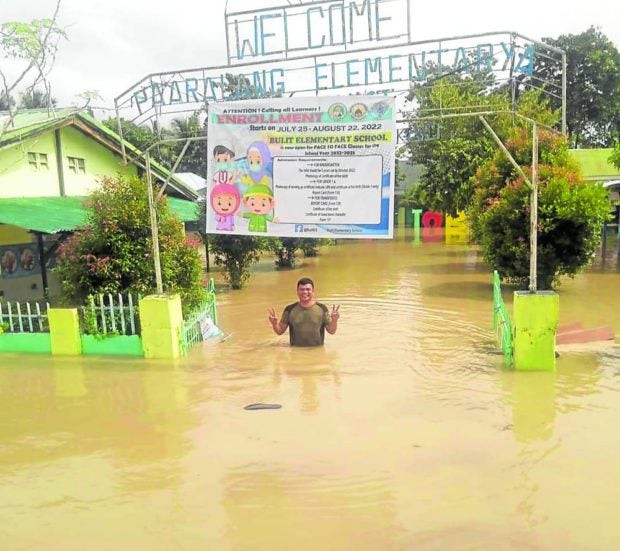 SUBMERGED | Floodwater swamps the grounds of an elementary school in Pagalungan, Maguindanao, as border villages of Maguindanao and Cotabato experience heavy flooding after the Pulangi River overflowed. (Photo by NASH ALIMANAN / Contributor)

Balumol Kadiding, Datu Montawal municipal disaster risk reduction and management officer, said at least 37,000 had been affected by the flooding but most of them had already moved to safer grounds.

“Many of them are home-based and are just waiting for the water to recede,” Kadiding said, adding that local officials were thankful that the town did not report any casualties.

Flooding, he said, has been a recurring problem in Datu Montawal as the town serves as a catch basin for river waters from the bigger rivers of Cotabato and Bukidnon as these eventually flow toward the Maguindanao marshland.

Mamasabulod said an estimated 40,000 people in his town alone were affected by floods. Pagalungan has a population of 46,000, composed mostly of farmers and fisherfolk.

According to Kaylan Abiden, a resident of Barangay Bulit in Pagalungan, she has learned to cope with the town’s flooding problem, which her family has been experiencing since her childhood.

“We just stay at home and wait for the water to recede. Eventually, it will go away in a day or two,” said Abiden, 37. She said she expected aid from the government to arrive anytime soon.

“Flooding is real. We are in this situation every rainy season,” Dats Magon, a resident of Barangay Pagagawan in Datu Montawal said. “This is a problem that has been annoying us for many years already, until now nobody seems to have a genuine solution.”

Kadiding said: “We already implemented forced evacuation but admittedly many are reluctant to vacate their homes.”

He said the number of affected families could even go higher as reports from village officials had yet to come.

Kadiding said the town’s disaster council would convene this week to consider recommending the declaration of a state of calamity that would facilitate the release of funds to help flood victims.