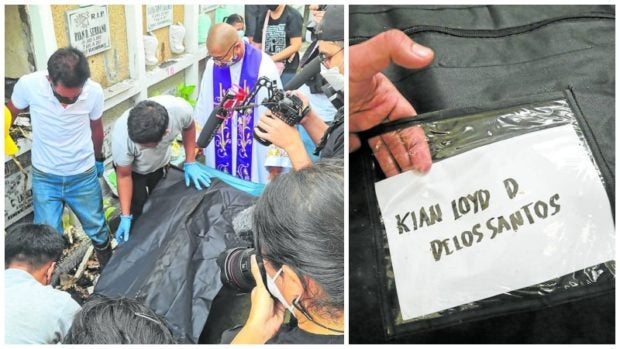 STILL GRIEVING The family of Kian de los Santos exhumes his remains a day before the fifth anniversary of his murder linked to the government’s war on drugs. The 17-year-old’s skeletal remains, contained in a tagged body bag (right), were taken to the University of the Philippines-Philippine General Hospital for forensic analysis. (Photos by KRIXIA SUBINGSUBING and LYN RILLON / Philippine Daily Inquirer)

MANILA, Philippines — Five years after he was killed by policemen carrying out then President Rodrigo Duterte’s war on drugs, there is still no peace for Kian de los Santos even in death, as his family exhumed his remains on Monday — a day before the five-year lease on his tomb in La Loma Cemetery was due to expire.

Delos Santos’ body had been placed in a niche among the so-called apartment tombs for the poor in that cemetery.

On Monday his family also allowed Delos Santos’ remains to undergo another autopsy, in the hope of uncovering “deeper truths” about his murder on Aug. 16, 2017.

“As we know, Kian’s autopsy was only done in his home before,” said activist-priest Flavie Villanueva, one of the primary caretakers of the families of extrajudicial killings (EJK) in northern Metro Manila.

“Another autopsy would allow us to reexamine how he was killed… [Let] us allow the bones of the dead, who were kept silent in the last five years, to speak their truth at last,” he added.

Delos Santos, a 17-year-old Grade 11 student, was killed during an anti-drug operation in Barangay 160, Caloocan City.

With the assistance of the Public Attorney’s Office, his parents Saldy and Lorenza sought to hale to court the police officers involved. The lawmen were subsequently charged with murder and violation of Republic Act No. 9745, or the Anti-Torture Act of 2009.

On Nov. 29, three months after De los Santos’ killing, the Caloocan City Regional Trial Court Branch 125 found PO1 Jerwin Cruz, PO3 Arnel Oares, and PO1 Jeremias Pereda guilty of murder. They were, however, acquitted of planting evidence, as this could not be proven in court.

The policemen had claimed that Delos Santos resisted arrest and opened fire. But this was contradicted by security camera footage showing the cops dragging him to a pigsty at a street corner before killing him.

They were sentenced to reclusion perpetua or up to 40 years in jail, without parole, and were also ordered to pay the Delos Santos family up to P345,000 in damages.

The conviction of Delos Santos’ killers was the only one so far in what human rights advocates described as state-sanctioned murders in the government’s drug war.

But 13 other implicated police officers, including then Chief Inspector Amor Cerillo of Caloocan Police Station 6, had been cleared by the Department of Justice — which noted, in particular, that there was no evidence proving that Cerillo gave explicit instructions to kill in the course of the Aug. 16, 2017, police operation.

Compared to the media coverage following Delos Santos’ death in 2017, his exhumation was a far more muted affair, with only Villanueva, his immediate family, and a few reporters in attendance.

When the cemetery caretakers opened his tomb, Delos Santos’ casket was in a state of disrepair, and they had to scoop out his bones amid decaying wood.

There were no tears during the 10-minute ceremony, but his uncle Randy confessed he held Kian’s bones “with a heavy heart still, … his face as a young student before he was killed enveloped my mind the whole time.”

Both Randy de los Santos and Villanueva expressed hope that a new autopsy under forensic pathologist Raquel Fortun would “tell us new truths.”

Kian de los Santos’ body was autopsied twice. The first revealed two bullet wounds, and the second showed three — the first entry point at his back; the second, behind the left ear; and the third, inside the left ear. The bullet exited at the right side of his head.

The autopsies also showed that he was shot kneeling down.

De los Santos was the 62nd victim to be exhumed under Villanueva’s Project Paghilom, a Church-led initiative to provide aid to families of victims of the drug war and rehabilitate drug dependents.

Villanueva said they started exhuming bodies in 2021, when the lease on the apartment tombs of victims in the first wave of EJKs in 2016 began to expire. That year, a family had approached Villanueva, saying they were not told that the cemetery had disposed of the body of a family member killed in the drug war.

Randy delos Santos said: “He (Kian) has been the face of the drug war and he was proof that the killings were getting out of hand. Thousands had died. We hope that through his story, more and more people would begin to accept that there are, in fact, EJKs and that there is abuse of power by law enforcers.”

While international groups monitoring the country’s human rights situation see Kian delos Santos’ death as testament to the culture of impunity under Duterte’s drug war, the government itself sees the conviction of his killers as proof that legal mechanisms are working.

But Randy asked: “Why is it only Kian?”

“If they were truly working hard to find justice, there would have been more convictions by now,” he said.

Conviction of cops in Kian slay a ‘warning’ to police — Año