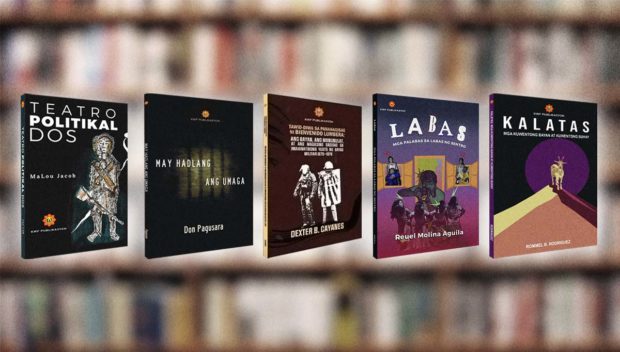 Scholars and organizations have condemned the KWF’s move to cease printing and remove from libraries these books for allegedly being subversive. (FILE PHOTOS by Komisyon sa Wikang Filipino)

MANILA, Philippines — Several panels within the House of Representatives have asked to conduct a joint inquiry on the Komisyon sa Wikang Filipino (KWF) memorandum banning five books deemed to have subversive content, as it is supposedly illegal.

Albay 1st District Rep. Edcel Lagman on Monday filed House Resolution No. 239, which, if approved during a plenary session, directs the House committees on human rights, basic education and culture, and higher and technical education to probe KWF’s now-controversial memo.

According to Lagman, the KWF memorandum is unconstitutional and illegal, especially as the said Commission is not authorized to censor publications as its primary mandate is to ensure the enrichment of the Filipino language.

“The said Memorandum is a patently unconstitutional edict, an obtrusive weapon of thought control, an unmitigated censorship and a wanton assault on academic freedom […] the KWF has no power and is not authorized under R.A. No. 7104, its enabling statute, to ban and censor writings in Filipino,” Lagman said in the resolution.

“Its principal mandate is ‘to ensure and promote the evolution and development and further enrichment of Filipino as the national language of the Philippines, on the basis of existing Philippine and other languages’, but it has no power to destroy or proscribe writings in Filipino,” he noted.

Before the resolution was filed, Lagman delivered a privilege speech during Monday’s session where he stressed that the 1987 Constitution and jurisprudence from the Supreme Court decisions protect the right to free expression.

The Albay lawmaker stressed that the 1987 Constitution’s Bill of Rights explicitly states, ‘ No law shall be passed abridging the freedom of speech, of expression, or of the press.’

“The Supreme Court nullified the official directives of the respondents warning the media on airing the alleged wiretapped conversation for ‘constituting unconstitutional prior restraint on the exercise of freedom of speech and the press’ or the freedom of expression,” Lagman said.

“Chief Justice Reynato Puno, the ponente of Chavez vs. Gonzalez, stressed that ‘The right belongs as well – if not more – to those who question, who do not conform, who differ,'” he added.

Scholars and organizations have condemned the KWF’s move to cease printing and remove from libraries the following books for allegedly being subversive:

But Lagman claimed that only two of the KWF’s commissioners had signed the memorandum, putting more questions on whether the directive is valid.

“The controversial Memorandum was signed only by the two full-time Commissioners, namely, Commissioners Carmelita Abdurahman and Benjamin Mendillo, out of 11 Commissioners including Chairman Arthur Casanova,” he said.

“The Memorandum does not have the conformity of the requisite majority of the Commissioners and it does not even have the imprimatur of the Chairman,” he added.

Other sectors have called out KWF — and eventually, broadcast company SMNI and the National Task Force to End Local Communist Armed Conflict (NTF-ELCAC) for allegedly red-tagging Filipino authors and the KWF, including its Chairperson Arthur Casanova.

Casanova was accused of allowing subversive materials to be published, but the KWF chair said such accusations are already stepping on the right to free expression.

During the same session, Kabataan party-list Rep. Raoul Manuel speculated that Filipino hero and author Jose Rizal would have been called an enemy of the state if he were alive today as he would be red-tagged and his books deemed to have contents inciting terrorism.

Manuel also asked whether Rizal and his fellow hero, revolution group Katipunan co-founder Andres Bonifacio would be censored or considered terrorists if they were alive today — even if they are espousing pro-Filipino ideas.