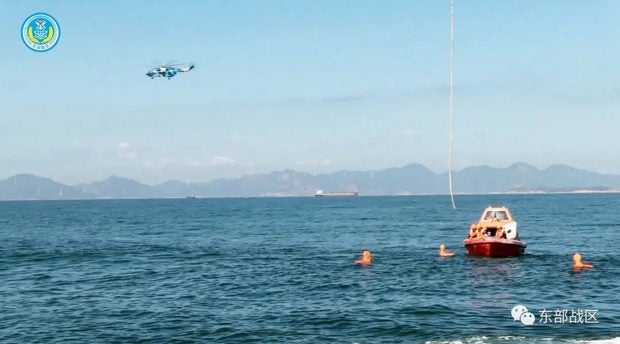 This handout image taken on August 9, 2022 and released by the Eastern Theater Command of the Chinese People’s Liberation Army (PLA) on August 10 shows a ship and a helicopter of PLA taking part in a military drill in an undisclosed location. AFP

The unannounced two-day trip came after Beijing sent warships, missiles and jets into the waters and skies around Taiwan, a self-ruled democracy that China’s leaders claim and have vowed to one day seize.

“The delegation had an opportunity to exchange views with Taiwan counterparts on a wide range of issues of importance to both the United States and Taiwan,” it said.

The bipartisan trip sparked a caustic response from Beijing, which said it had carried out “combat readiness patrol and combat drills in the sea and airspace around Taiwan island” on Monday.

“This is a solemn deterrent against the US and Taiwan for continuing to play political tricks and undermining peace and stability across the Taiwan Strait,” Shi Yi, spokesman for the Chinese military’s Eastern Theater Command, said in a statement, promising to “resolutely defend national sovereignty”.

Taiwan’s government has accused Beijing of using Pelosi’s visit as an excuse to kickstart drills that would allow it to rehearse for an invasion.

China’s Communist Party has never ruled Taiwan but says it will use force if necessary to take the island and bristles at any perceived treatment of it as a sovereign nation state.

In response to the delegation’s visit, Beijing called on Washington to “stop going further down the wrong path of hollowing out and distorting the one-China principle, so as not to cause further damage to China-US relations and peace and stability in the Taiwan Strait”.

That decades-old threat was reiterated in a white paper published last week when China’s Taiwan Affairs Office said it would “not renounce the use of force” against its neighbor and reserved “the option of taking all necessary measures”.

Taipei has remained defiant throughout the standoff with Beijing, with foreign minister Joseph Wu saying after a meeting with the delegation that their visit showed the island had not been cowed by China’s threats.

“Their visit once again demonstrates that China cannot dictate nor instruct other countries’ politicians not to visit Taiwan,” Lo Chih-cheng, a lawmaker with the ruling Democratic Progressive Party (DPP), told AFP.

Pelosi has stood by her visit but President Joe Biden said the US military was opposed to the trip by his fellow Democrat, who is second in line to the presidency after the vice president.

Congress is constitutionally an equal branch of government in the United States, with lawmakers free to travel where they wish, and Taiwan enjoys bipartisan backing in divided Washington.

It remains deliberately ambiguous about whether it would come to Taiwan’s aid militarily if China invaded.

Visits by senior US officials to Taiwan have happened for decades and even Pelosi’s trip was not without precedent — then-speaker of the House of Representatives Newt Gingrich visited in 1997.

But the frequency and profile of US visits has increased both under former president Donald Trump and Biden.

Taiwan has also seen a flurry of delegations visit from Europe and other Western allies in recent years, partly in response to Beijing’s more aggressive stance under Chinese President Xi Jinping.