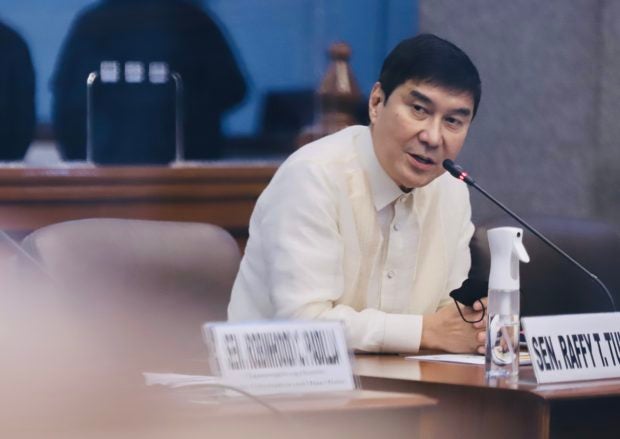 Sen. Raffy Tulfo asks the Office of the Press Secretary to practice issuing notices written in both English and Filipino so that everyone can understand them. (Adrian Luciano/Senate PRIB)

MANILA, Philippines — The use of Filipino language in government offices, especially when disseminating information, got another push from Senator Raffy Tulfo on Monday.

At the hearing of the Senate committee on public information, Tulfo lamented that notices in almost all government offices are written in English.

(Not everyone who visits government establishments to transact are educated, rich. Many of them are from the poorest of the poor. Many don’t understand English.)

(Can we request that from now on, under your watch, make it a point to have the notice in English with Filipino translation.)

He pointed out that in other countries, English notices and signages are translated in the native language.

(Why here in the Philippines, we insist using English language in our notices that we forget our Filipino language.)

“So pwede ho bang… from now on, sa lahat ng government establishments, side by side in English and then may tagalog para po dun sa hindi masyado nakakaintindi ng English,” Tulfo stressed.

(So is it possible that from now on, in all government establishments, let’s use use side by side English and Filipino [languages] for those who can’t understand English.)

Cruz-Angeles responded positively to the request, saying she can commit that their notices will be both in English and Filipino.

She also noted that no less than President Ferdinand “Bongbong” Marcos Jr. has enjoined everyone to “intellectualize” the Filipino language to further  promote and expand the use of the native language.

(That’s why one of our visions is for NPO and APO to publish cheaper books and to have authors from different dialects here in the Philippines.

Despite this promise, Tulfo went on, noting that other television networks have already been translating their telenovelas to Filipino to reach more audience.

(Why is it in government, we still use English?)