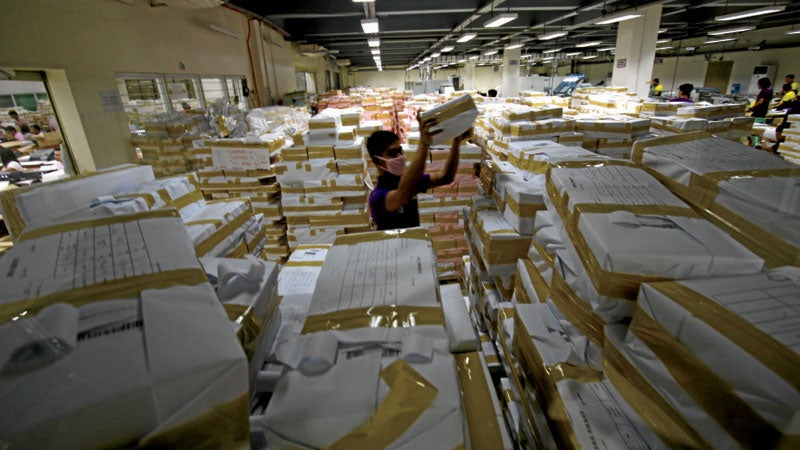 PRINTING PROBE Materials produced by the National Printing Office are stacked inside its Quezon City plant. The agency is being investigated for overprinting tax seals for cigarettes and liquor reportedly being used by smugglers to sell their contraband. RICHARD A. REYES

THE GOVERNMENT has launched an investigation into the overprinting of tax seals for cigarettes and liquor that are allegedly used by smugglers to sell contraband in the local market.

Presidential Communications Secretary Martin Andanar said he had ordered an audit of the National Printing Office (NPO) and Apo Productions Unit Inc. (Apo) to determine who are responsible for the unlawful production and distribution of tax stamps.

The NPO and Apo, the designated printers of all accountable forms of the government, are both under the Presidential Communications Office headed by Andanar.

“We have to fix this,” the former television broadcaster said in a roundtable talk with Inquirer reporters and editors last Thursday.

“I have ordered an audit … to show the public that it has been happening … It’s already happening before we came in,” he said.

According to Andanar, the information on the oversupply of tax seals was relayed to him by the Bureau of Internal Revenue (BIR).

He said a BIR official had complained to him about the nefarious activity in the NPO, which is also tasked with printing ballots and other election paraphernalia.

The official claimed the overprinting of tax seals was being done by somebody “inside” the NPO.

“It’s difficult to get evidence, but the BIR said it’s [true]. So now they have to produce the evidence that there was double printing of the tax seals for cigarettes and liquor,” Andanar said.

If proven true, he said, the government could have lost a significant amount in potential revenue from the excise taxes that the BIR should have collected from manufacturers of cigarettes and liquor.

“I was told the tax seals were being used to sell cigarettes and alcoholic beverages that were smuggled into the country,”  Andanar said.

Last year, then BIR Chief Kim Henares said her office was verifying information that bogus tax stamps were being attached to cigarette packs.