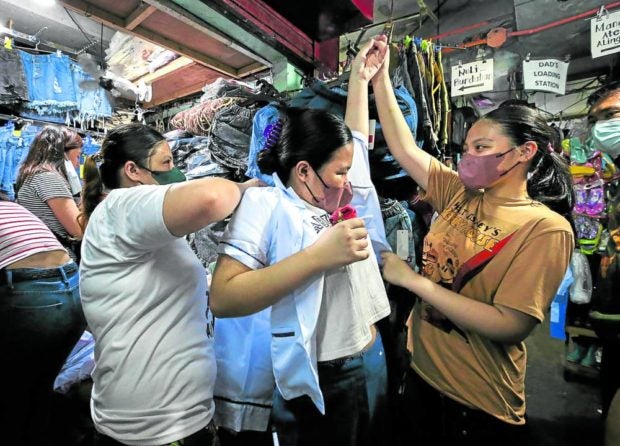 GETTING READY | A girl is helped by her family as she tries out a school uniform at a shop in Malabon City. (Photo by LYN RILLON / Philippine Daily Inquirer)

MANILA, Philippines — The Department of Education (DepEd) launches today the annual Oplan Balik Eskwela (OBE) as it also begins operations for its Public Assistance Command Center (PACC) at the DepEd Central Office in Pasig City, exactly one week before the opening of classes next Monday.

Besides the PACC, command centers would also be set up at the regional and school division offices to serve as an information and complaint processing and routing mechanism.

“The intention is to have a command center so that if anyone notices any problem, concerns, or issues, they could relay it to the Department of Education and we could immediately take action,” DepEd spokesperson Michael Poa said at a recent press briefing.

ACT meanwhile said it would forward reports it gathers next week to the concerned DepEd offices for their response and action.

As explained by DepEd’s Memorandum No. 53, the OBE — which runs today until Aug. 26 — is an annual initiative aimed at engaging the government and other stakeholders in the preparation for the opening of the school year on Aug. 22.

Schools will have the option of conducting full in-person classes or under a setup blending physical sessions and distance learning until Oct. 31.

But by Nov. 2, all public and private schools in the country will switch to full in-person classes, as directed by a July 11 order by Education Secretary Sara Duterte, who is also the country’s vice president.

The only exceptions are schools identified by DepEd as having special circumstances that would justify continuing the blended learning setup.

“We’re sure, since the majority of the students were not able to go to school for two years, this will not be without challenges. But we’re here at the Command Center to ensure [a] smooth back-to-school [transition],” Poa said.

The agencies participating in the OBE include the departments of health, social welfare and development, national defense, public works and highways, transportation, the interior and local government, energy, information and communications technology, and trade and industry.