PUP deploys ‘school bus’ to bring education on the road 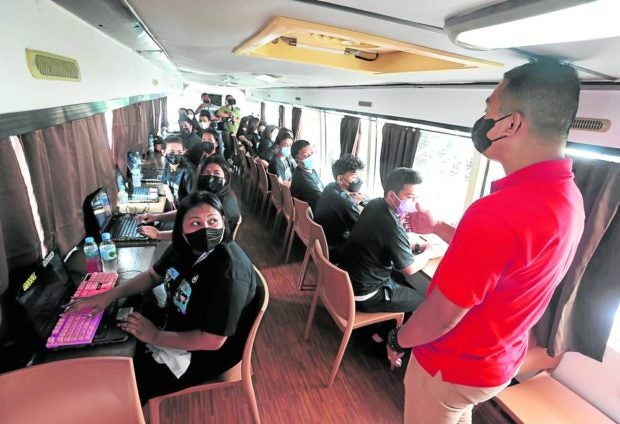 ON THE MOVE | Students from the Smokey Mountain community in the Manila district of Tondo attend a “pilot” class session at a passenger bus converted into a roving classroom. This project by the Polytechnic University of the Philippines aims to promote tertiary education among young workers seeking to complete their schooling. (Photo by MARIANNE BERMUDEZ / Philippine Daily Inquirer)

MANILA, Philippines — Marialyn Abilong, 25, was only in second-year college when he had to give up studying to get a job — vonly to find out years later that he couldn’t get a promotion at the construction company where he worked because he lacked a college degree.

“I don’t have any documents to show. My bosses would tell me that they cannot promote me because only those with academic degrees could move ahead,” he said in an interview with the Inquirer.

Four years later, an opportunity from the Polytechnic University of the Philippines (PUP) came knocking at the door of his home in Smokey Mountain in Tondo, Manila, in the form of “Education on Wheels.”

The PUP project, which was launched last year, aims to literally provide access to education on the road, turning a donated passenger bus into a roving classroom. This gives new meaning to “school bus,” as one student availing herself of that program noted.

According to the state university, “Education on Wheels” is an effort to bring tertiary education closer to out-of-school and underprivileged young adults in Tondo who otherwise can’t afford to finish college.

For that purpose, the air-conditioned bus had to be redesigned, its passenger seats removed and replaced with chairs and tables facing the windows. The mobile classroom could accommodate as many as 15 students per session. But for now, “Wheels” will follow the limitation on in-person classes when the school year begins.

‘Better when you graduate’

A partner organization of PUP based in Smokey Mountain, the nongovernmental organization Sandiwaan Center for Learning endorsed 60 youths for enrollment in a four-year program offering a Bachelor of Science in Office Administration degree.

The students were divided into two groups, those currently not working and those with full-time or part-time jobs like Abilong.

“When face-to-face classes start, I would ask permission from my employer to leave work early, if needed. Right now, my priority is my studies because I realized that it’s better when you graduate,” Abilong said during the pilot run of “Wheels.”

Mark Christian Catapang, a course specialist at PUP’s Open University and one of the professors tapped for the “Wheels” project, said he was “excited but slightly nervous” to be meeting students once again, “because I’m not sure what they expect from me and what they could learn from the class.”

Marjorie Villacorta, a full-time mom, graduated in 2017 with a bachelor’s degree in education and even passed the licensure exam for teachers. But for her, the “Wheels” project was “another chance” to study again.

“Since I cannot apply for jobs because I have [to take care of] my three kids, I thought… I’d try to study again,” she said, adding that she may apply for an office job when she earns the office administration degree.

Her partner Patrick Navea, who works as a contractual glass and aluminum installer, has also availed himself of the project.

“He only finished three years in college so I told him to continue his studies again so he can get a degree,” said Villacorta, who divides her time with Navea by attending to their children in the morning while he’s at work.

She is pleased to note that the “school bus” is parked not far from their residence, especially considering that their classes are usually scheduled in the evening.

“We are really blessed to be part of the… project, especially the youth who aim to finish their studies and the parents who were previously forced to stop because of financial problems,” Villacorta said.

“When this arrived, they had a chance to continue their dreams,” she added.

PUP rolls out ‘school bus’ for youths in Tondo

Efren’s ‘kariton’ wheels out of Cavite to rest of country

Letting the school come to the poor

Read Next
PH-US Pacific partnership training underway in Palawan
EDITORS' PICK
Percy Lapid’s kin: ‘We demand that his cowardly assassins be brought to justice’
Nothing’s certain so here’s how everyday Filipinos can make the most out of their Plan B
Do all the things you do, faster
PNP vows to bring justice for slain Percy Lapid; says probe underway
House energy committee chair Arroyo bats for cheap electricity
‘Seniority’ requirement despite vacant posts in DOH bothers senators
MOST READ
Student stabs teacher dead in Samar town
Trixie Angeles quits as press secretary due to health reasons
Not rehired?: Trixie Angeles not on list of reappointed Cabinet execs
Heart Evangelista to stay abroad ‘indefinitely’: ‘Hindi muna ako babalik’
Don't miss out on the latest news and information.