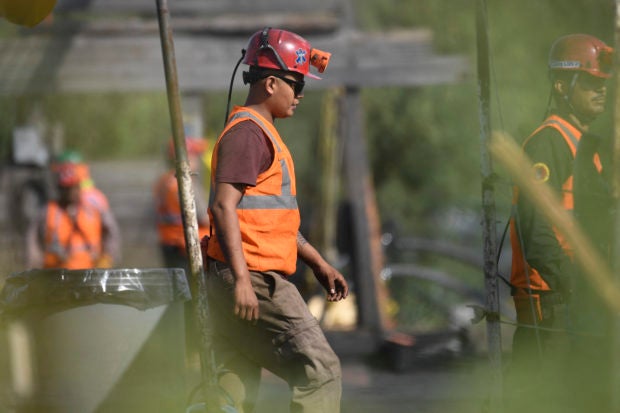 Rescue personnel take part in an operation attempting to reach 10 miners trapped in a flooded coal mine following a landslide, in the community of Agujita, Sabinas Municipality, Coahuila State, Mexico, on August 12, 2022. – Mexican authorities said on Friday they are in a position to enter the flooded coal mine where 10 workers have been trapped for more than a week. (Photo by Pedro PARDO / AFP)

Agujita, Mexico — Mexican authorities said Friday they were finally in a position to begin searching a flooded coal mine where 10 workers have been trapped for more than a week, offering fresh hope to anguished relatives.

Several hundred rescuers, including soldiers and military scuba divers, are taking part in efforts to save the miners missing since August 3 in the northern state of Coahuila.

“We have all the conditions to go down there today… to search for and rescue” the miners, civil defense national coordinator Laura Velazquez said.

On Thursday, rescuers had made several attempts to go into the main tunnels but found debris blocking their way that needed to be removed.

Velazquez said the rescue operation would become possible once “97 percent of the water” has been extracted from the 60-meter (200-feet) deep mine in the town of Agujita.

“The necessary resources for the search and rescue have been prepared,” she said by video link during President Andres Manuel Lopez Obrador’s daily news conference.

The water level in one of the three vertical shafts that rescuers will try to enter has been reduced to 70 centimeters (27 inches), from more than 30 meters initially, Defense Minister Luis Cresencio Sandoval said.

The other two shafts still have 3.9 and 4.7 meters of water.

Authorities consider 1.5 meters to be an acceptable water level to gain access to the crudely constructed El Pinabete mine.

“In any case, we’re going to continue pumping… The process is slow but we don’t want to take any risks,” said Velazquez.

Five miners managed to escape following the initial accident, in which workers carrying out excavation activities hit an adjoining area full of water, but there have been no signs of life from the others.

The government’s latest announcement provided a new glimmer of hope for families that have become increasingly frustrated with the pace of the rescue operation.

“With that level (of water) you can already enter — God willing,” David Huerta, the brother-in-law of one of the trapped workers, told AFP.

The 35-year-old said that he himself had dug for coal in small artisanal mines like El Pinabete for nearly 13 years before abandoning the dangerous, grueling work.

At the bottom of the vertical shafts rescuers will reach the underground tunnels where the digging takes place, and where the missing miners are probably located, Huerta said.

“Crews can go in there and search faster,” he added.

Ronaldo Mireles, the son of one of the missing workers, has worked tirelessly with soldiers and other volunteers to install pumps and pipes to empty the mine of water.

“We’ve been here day and night. It was only two days ago that we could go home to sleep,” the 24-year-old said during a break.

READ: ‘Time against us’ in bid to rescue 10 Mexican miners after 3 days underground

Relatives and friends held a candlelit vigil on Thursday night for those missing, singing and praying for their safe return.

Coahuila, Mexico’s main coal-producing region, has seen a series of fatal mining incidents over the years.

The worst accident was an explosion that claimed 65 lives at the Pasta de Conchos mine in 2006.

Last year, seven died when they were trapped in a mine in the region.