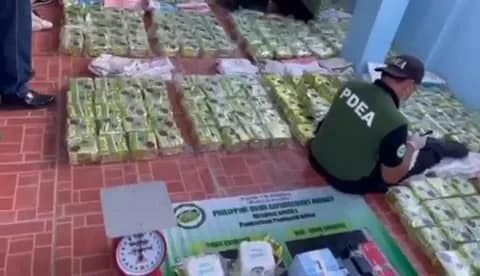 An agent of the Philippine Drug Enforcement Agency (PDEA) checks the pieces of evidence, including suspected “shabu” packed and labeled as “Chinese Tea”, that were confiscated during separate operations in Pangasinan and La Union provinces on Friday, August 12, 2022. Photo from PDEA

MANILA, Philippines — A Chinese national and five other people were arrested while P2.72 billion worth of suspected crystal meth, or locally known as “shabu”, was seized in separate operations in Pangasinan and La Union provinces on Friday, the Philippine Drug Enforcement Agency (PDEA) said.

The PDEA said operatives confiscated 360 kilograms of shabu worth P2.448 billion from Ke and his Filipino cohorts, as well as the buy-bust money, assorted identification cards, and other materials.

A follow-up operation in Barangay Poro, San Fernando, La Union, at 12:45 p.m. also resulted in the arrest of Romel Leyese, 38; and an 18-year-old male.

Confiscated from the two are 40 kilograms of shabu worth more than P272 million, cellular phones, various identification cards, and financial documents.

The PDEA said the illegal drug were still packed and labeled as “Chinese Tea” when seized by authorities.

The suspects will face charges in violation of Republic Act 9165 or the Comprehensive Dangerous Drugs Act of 2002, the PDEA added.