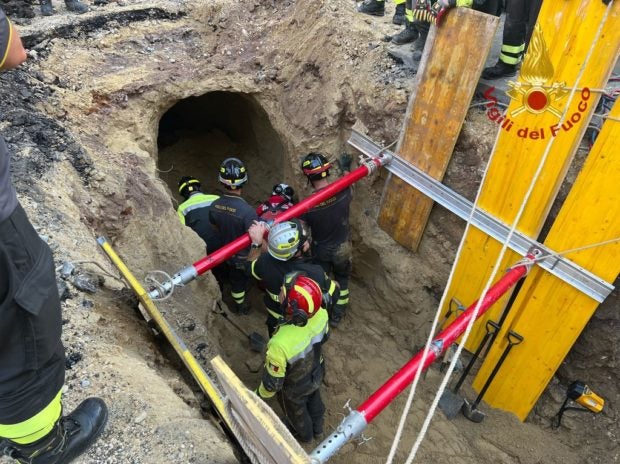 A Photo taken on August 11, 2022 in Rome and handout on August 12, 2022 by the Italian Firefighters Corps. (Vigili del Fuoco), shows first responders during a rescuing operation for a suspected thief who was buried under rubble for about eight hours, as he was allegedly digging a tunnel with his accomplices, presumably to rob a bank.(Photo by Handout / Vigili del Fuoco / AFP)

Rome, Italy — An Italian man had to be rescued after becoming trapped in a collapsed tunnel near the Vatican, suspected of being part of a gang burrowing its way to a nearby bank, police said Friday.

Firefighters spent eight hours digging him out from under a road in the west of Rome, before he was finally freed on Thursday evening and taken to hospital.

“Two people from Naples were arrested for resisting a public official and two, from Rome, for damage” to public property, a police spokesman told AFP.

The rescued man, one of the two Romans, remains in hospital, he said without giving an update on his condition.

“We are still investigating, we do not exclude that they are thieves, it is one of the theories,” he said.

For Italian newspapers, however, the motive was clear, noting the tunnel was found near a bank ahead of the August 15 long weekend, when residents traditionally head out of town and much of Rome becomes empty.

“The hole gang,” headlined the Corriere della Sera daily, while La Stampa said: “They dig a tunnel to rob a bank, and one of them is buried underground.”

An AFP reporter at the scene Thursday saw the man brought out alive on a stretcher, after a day-long operation involving dozens of emergency service workers using mechanical diggers.

The tunnel began underneath an empty shop that had recently been rented.

“We all thought that the people there were renovating the place. So, we had no suspicion and we did not hear noises either,” a resident, Michele, who lives in the same building told AFP.